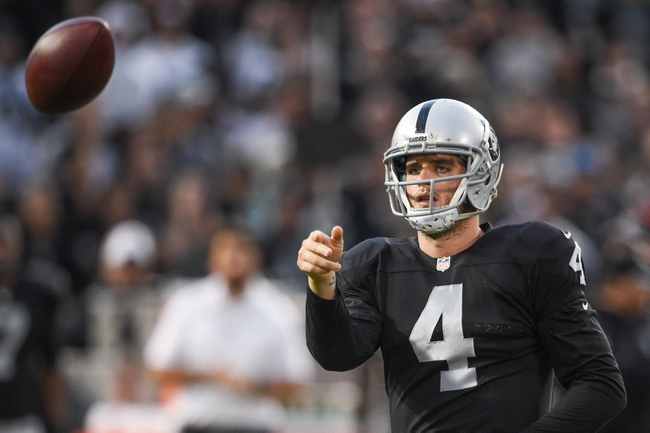 The Oakland Raiders and the Buffalo Bills face off on Sunday in Oakland in week 13 NFL action.

The Oakland Raiders are 9-2 this season and they are in first place in the AFC West. The Raiders offense is 5th ranked in the NFL and is averaging 27.9 points and 390.9 yards per game and they are plus 10 in turnover ratio. Oakland QB Derek Carr has completed 66.4 percent of his passes with 22 touchdowns and 5 interceptions. Latavius Murray anchors the Raiders rushing attack with 471 yards and 9 touchdowns and Amari Cooper has 66 receptions and 3 touchdowns and Michael Crabtree has 60 receptions and 6 touchdowns. Defensively the Raiders are allowing 25 points and a 29th ranked 390.4 yards per game with 10 interceptions, 14 fumble recoveries, and 17 sacks. Malcolm Smith has 66 tackles to lead the Oakland defense, Karl Joseph has 56 tackles, and Khalil Mack has 9 sacks. Oakland has made up for their defensive deficiencies with turnovers and not turning the ball over.

The Buffalo Bills are 6-5 this season and they are in third place in the AFC East. The Bills offense is averaging 25.5 points and 339.9 yards per game and they are plus 8 in turnover ratio. Buffalo QB Tyrod Taylor has completed 61.7 percent of his passes with 11 touchdowns and 4 interceptions and he has rushed for 439 yards and 5 touchdowns. LeSean McCoy leads the Bills rushing attack 819 yards and 9 touchdowns and he has 28 receptions and Robert Woods is the top receiver with 42 catches and a touchdown. Defensively the Bills are allowing 21.5 points and 341.9 yards per game with 8 interceptions, 10 fumble recoveries, and 33 sacks. Zach Brown is the Bills leading tackler with 107 including 3 sacks, Preston Brown has 88 tackles, and Lorenzo Alexander 10 sacks. The Bills are looking to get over the hump as the playoffs in the AFC will be settled over the next 5 weeks.

This game is going to be close and the points look to be about right but I will take the points with the Bills as they seem to be the better option in this spot.