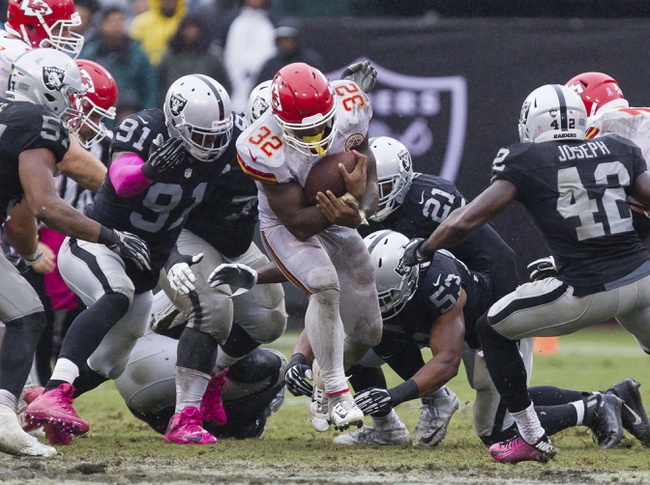 The Oakland Raiders and Kansas City Chiefs square off in a key AFC West NFL matchup Thursday night at Arrowhead Stadium on NBC.

The Oakland Raiders look for their seventh straight victory to build on their lead in the AFC. The Oakland Raiders haven't won 11 games since the 2002 NFL season. Derek Carr is completing 65.5 percent of his passes for 3,375 yards, 24 touchdowns and five interceptions. Carr has two or more touchdown passes in six of his last nine games. Amari Cooper and Michael Crabtree have combined for more than 1,766 receiving yards and 11 touchdowns while Seth Roberts has 31 receptions. The Oakland Raiders ground game is averaging 114.6 yards per contest, and Latavius Murray leads the way with 553 yards and 11 touchdowns. Defensively, Oakland is allowing 24.9 points and 389.7 yards per game. Malcolm Smith leads the Oakland Raiders with 72 tackles, Khalil Mack has 10 sacks and Reggie Nelson has three interceptions.

The Chiefs took care of the Raiders on the road fairly easily earlier this season and have won four straight against the Raiders overall. In his career, Carr is 1-4 against the Chiefs with a completion percentage of 57.7 and has five interceptions to six touchdown passes. There's no team Carr has thrown more interceptions against. The bottom line is the Kansas City Chiefs continue to find ways to win games and their defense is the deciding factor in this contest. The Oakland Raiders won't be able to trade scores in this contest like they have pretty much all season.

I'll take the Chiefs and the small line on their home field.