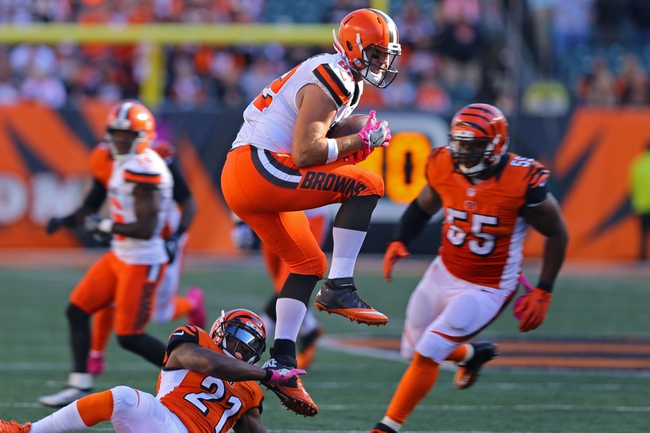 The Cleveland Browns will be looking for that elusive first win of the season when they host the Cincinnati Bengals in a week 14 AFC North battle.

The Cincinnati Bengals snapped a 4-game winless streak with a 32-14 victory over the Philadelphia Eagles in week 13. Dalton threw for 332 yards and a pair of touchdowns on 23 of 31 passing. Rex Burkhead lead Cincy's ground attack with 38 yards on 8 carries while Jeremy Hill racked up just 33 yards on 23 carries, but made up for it with a 2-yard touchdown. Brandon LaFell led the Bengals with 5 catches for 95 yards and a touchdown. Tyler Boyd came 2nd with 4 catches for 66 yards and Tyler Eifert hauled in a pair of passes for 25 yards and a touchdown of his own. It was a pretty solid outing for the Bengals defense. The 14 points for the Eagles were the 2nd-lowest by any Cincinnati opponent this season and they managed to record 3 interceptions of Philly QB Carson Wentz.

The Cleveland Browns were one of the final 2 teams to have their bye week in week 13, and it was much needed after dropping their 12th straight game this season to fall to 0-12 after a 27-13 defeat to the New York Giants. Josh McCown threw for 322 yards and a touchdown while being sacked a whopping 7 times in the game. Isaiah Crowell led the Browns with 44 yards on the ground on his 16 carries. Terrelle Pryor Sr. led the Browns with 131 yards on 6 catches while Crowell also caught 6 balls out of the backfield for 44 yards. Corey Coleman caught his first touchdown since September 18th with his 3 receptions for 38 yards. Defensively, the Browns didn't do too bad. It was just the fact that they couldn't get much pressure on Giants QB Eli Manning, despite holding him to just 194 yards through the air.

Cincinnati may have had the upper hand in recent years against Cleveland, but I think this is where the Browns turn it around. The Browns will be playing their potential Super Bowl every week in the effort to avoid a dreaded 0-16 season. Cincinnati has nothing left to play for and injuries have ravaged this team to where they are now. Not to mention RGIII will be back under centre for the Browns, which has to give Cleveland some confidence that they can actually steal a win here.

I like the points, but I also think the browns are worth a small bet on the money line as well.