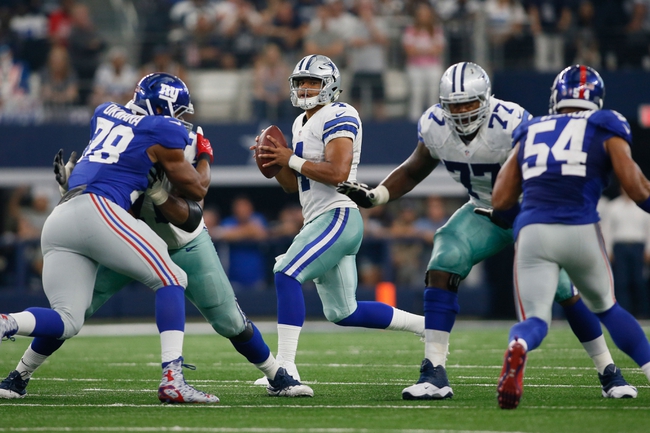 Headed our way on December 11 in the Week 14 edition of the NFL’s “Sunday Night Football,” we’ve got a divisional rivalry game between the Dallas Cowboys and the New York Giants.

Dallas is cooking right now, and comes into this game with a stellar 11-1 record. The Cowboys’ latest win came last Thursday against the Vikings, eking by 17-15. In that game, Dallas WR Dez Bryant caught four passes for 84 yards and the go-ahead score.

On the year thus far, QB Dak Prescott holds 2974 yards, 19 touchdowns and just two picks, while Ezekiel Elliott leads the ground team in Dallas with 1285 yards and 12 touchdowns on 263 attempts. Cole Beasley is the Cowboys’ top receiver this year, with 60 catches for 670 yards and five scores.

Over on the Giants’ side, they’re coming into Week 14 with an 8-4 record after falling to the Steelers 24-14 this past Sunday. In that game, Giants QB Eli Manning threw a pair of interceptions while the team totaled just 56 yards on the ground.

So far this season, Manning has put up 3097 yards for 22 touchdowns and 12 picks, while Rashad Jennings is still the rushing leader for the Giants on 121 attempts for 414 yards and two scores. Odell Beckham Jr. leads the New York aerial attack on 75 catches for 1015 yards and eight touchdowns.

The Giants had a nice win streak going there for a while, and things were looking good until their offense started getting hung up. New York still has some tough games on the schedule—including this one—and needs to get things humming again. As for the Cowboys, they looked a little lost against the Vikings at times, but did just enough to win. I’ll stick with Dallas to cover here, but not by much.