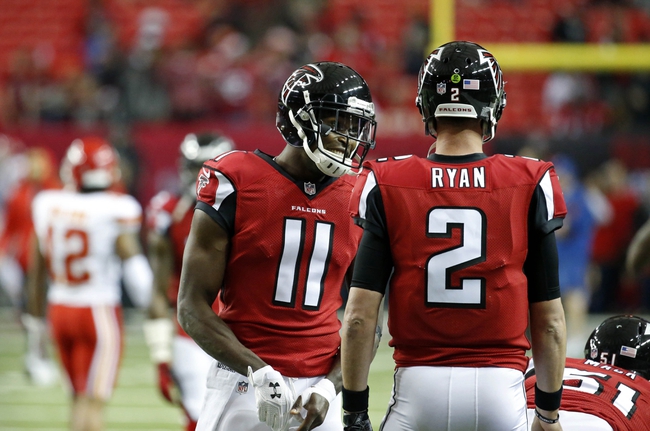 The Atlanta Falcons and the San Francisco 49ers face off on Sunday in Week 15 NFL action.

The Atlanta Falcons are 8-5 this season and they are in first place in the AFC South. The Falcons offense is averaging a NFL best 32.9 points per game and a 3rd best 402.3 yards per game and they are plus 8 in turnover ratio. Atlanta QB Matt Ryan has completed 68.3 percent of his passes with 30 touchdowns and 7 interceptions. Devonta Freeman is the Falcons leading rusher with 791 yards and 7 touchdowns and Julio Jones has 72 receptions and 5 touchdowns. The Atlanta defense is ranked 28th in points per game allowed at 26.5 and yards per game allowed at 376.3 and they have 9 interceptions, 15 fumble recoveries, and 28 sacks. Keanu Neal is Atlanta’s leading tackler with 87, Deion Jones has 81, and Vic Beasley has 13.5 sacks. The Falcons have looked at times like a top tier team but in order to beat the best teams they will need to be better on defense.

The San Francisco 49ers are 1-12 this season which is the second worst record in the NFL this year. The 49ers offense is averaging 19.3 points and 314 yards per game and they are minus 3 in turnover ratio. Colin Kapernick remains the Niners QB and he has completed 54.8 percent of his passes with 11 touchdowns and 3 interceptions and he has rushed for 416 yards. Carlos Hyde leads the 49ers in rushing with 879 yards and 6 touchdowns and Jeremy Kerley is the top receiver with 48 catches and 3 touchdowns. The San Francisco defense is ranked last in the NFL in yards allowed per game at 415.3 and points allowed per game at 30.2 and they have 8 interceptions, 11 fumble recoveries, and 26 sacks. Antoine Bethea leads the 49ers in tackles with 86, Nick Bellore has 82 tackles, and Ahmad Brooks has 5 sacks. The 49ers have been free-falling since week one and they had a chance to stop the bleeding but they let a big lead get away from them last week.

The 49ers are just awful and I look for the high powered Falcons to blow them out of the building.