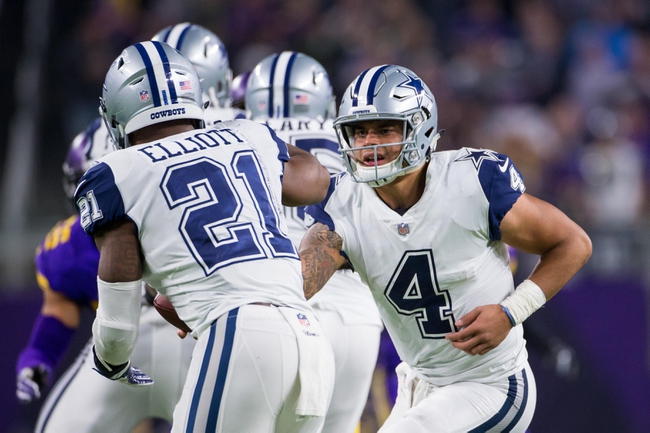 On the Week 15 edition of the NFL’s “Sunday Night Football” on December 18, the Tampa Bay Buccaneers will be traveling to visit the Dallas Cowboys down at AT&T Stadium.

Tampa Bay comes in on a roll here, winning five games in a row en route to an 8-5 record. The Buccaneers’ latest victory came 16-11 over the Saints this past Sunday. In that one Tampa Bay RB Doug Martin was productive on 66 yards and a TD.

So far this year, Buccaneers QB Jameis Winston has tossed 3364 yards, 23 touchdowns and 12 picks, while Jacquizz Rodgers leads the RB rankings on 422 yards and a TD on 97 carries. Mike Evans is tops in the Tampa Bay receiving game on his 80 catches for 1100 yards and 10 touchdowns.

Over on the Cowboys’ side, they’re playing well this year on an 11-2 record, but have lost two games to the Giants. In the most recent, a 10-7 defeat on Sunday, Dallas QB Dak Prescott threw for 165 yards, one touchdown and two interceptions.

On the season thus far, Prescott has 3139 yards with 20 touchdowns and four picks, while Ezekiel Elliott has been excellent on 1392 yards and 12 touchdowns in his 287 carries for the Cowboys. Leading Dallas in receiving is Cole Beasley, who has 64 catches for 711 yards and five scores.

There have been rumblings around the league as to whether or not Tony Romo should be reclaiming his job from Prescott, as Romo would be the better QB behind that offensive line and in front of the surging Elliott. All that talk is moot for now, but Prescott is going to have to take the training wheels off at some point if the Cowboys are going to do any damage in the playoffs. That gauntlet has already begun, and though I think Dallas will win the game I don’t think it will be by more than a TD. I’ll take the Buccaneers to cover.