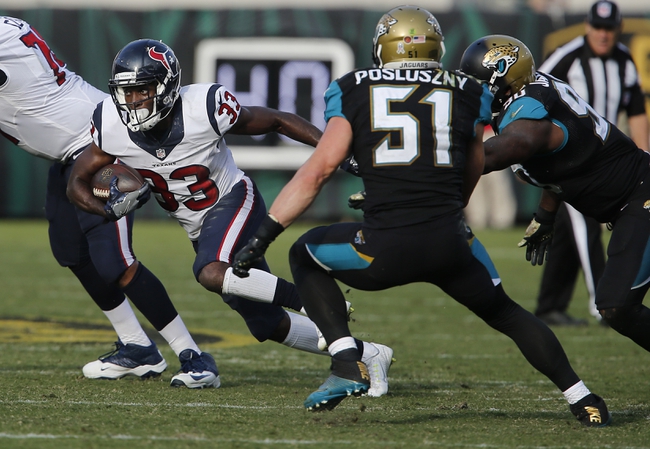 The Houston Texans and the Jacksonville Jaguars face off on Sunday in a Week 15 NFL AFC South battle.

The Houston Texans are 7-6 this season and they lead the AFC South and control their own destiny in the playoff picture. The Texans offense is averaging 17.6 points and 316.1 yards per game and they are minus 7 in turnover ratio. Houston QB Brock Osweiler has been a disappointment completing 59.7 of his passes with 14 touchdowns and 14 interceptions. Lamar Miller is the Texans top rusher with 1010 yards and 4 touchdowns and DeAndre Hopkins is the top receiver with 60 catches and 4 touchdowns. The Texans defense is allowing 21.1 points and 318.5 yards per game and they have 8 interceptions, 7 fumble recoveries, and 22 sacks. Bernardrick McKinney leads Houston with 114 tackles, Kareem Jackson has 54 tackles, and Whitney Mercilus has 5.5 sacks. Like their QB the Texans have been inconsistent but in a soft AFC South they have been good enough.

The Jacksonville Jaguars are 2-11 this season and they have lost their last 8 games in a row. The Jaguars offense has been terrible averaging 18.5 points and 332.6 yards per game with a NFL worst minus 17 turnover ratio. Jacksonville QB Blake Bortles has completed 58.7 percent of his passes with 21 touchdowns and 15 interceptions. T.J. Yeldon is the Jaguars leading rusher with just 432 yards and a touchdown and Allen Robinson is the leading receiver with 57 catches and 6 touchdowns. The Jaguars defense is allowing 26 points and 316.4 yards per game with 3 interceptions, 8 fumble recoveries, and 26 sacks. Paul Posluszny leads Jacksonville in tackles with 107, Johnathan Cyprien has 98 tackles, and Telvin Smith has 96 tackles. The Jaguars just haven’t been good enough and it all starts with Bortles play at QB.

Earlier this year Jacksonville was covering plenty without winning but of late they haven’t even been able to do that and while this might be a matchup of two of the worst QB’s in the NFL I will lay the points with a motivated Texans team.