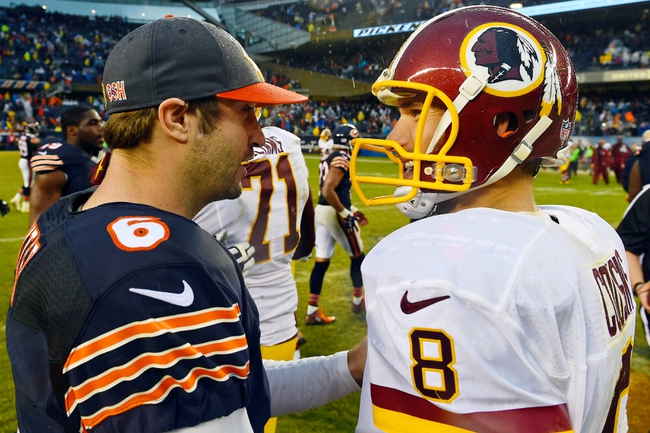 Up at Soldier Field on Saturday, December 24 in Week 16 NFL action, the Washington Redskins and the Chicago Bears will be meeting up.

The Redskins enter play in Week 16 with a 7-6-1 record on the season. Washington has lost three of their last four, including a 26-15 implosion against Carolina on Monday night. In that game, Redskins QB Kirk Cousins tossed an interception and fumbled near the goal line to help key the loss.

On the season so far, Cousins has 4360 yards with 23 touchdowns and 10 picks, while Robert Kelley is the Redskins’ top rusher on 595 yards and six scores. DeSean Jackson is Washington’s lead receiver with 49 receptions, 857 yards and four TDs.

Over on the Bears side, they’re entering play here with a meager 3-11 record on the season. Chicago has lost five of their last six games, most recently a 30-27 defeat at the hands of the Packers on Sunday. In that game, the Bears allowed 162 yards and two touchdowns on 16 carries to Ty Montgomery.

So far this season for Chicago, Brian Hoyer leads the team in passing with 1445 yards, six touchdowns and no interceptions, while Jordan Howard is the top rusher on 1059 yards and six touchdowns on 211 attempts. Alshon Jeffery is the Bears’ top receiver with 46 catches for 719 yards and two scores this year.

There’s not a whole lot to get excited about in this game; it’s two teams that won’t make the playoffs basically finishing out the season. That said, this may be a fairly close game, as neither team seems to have given up on the year just yet. Still, I expect the Redskins to eke out a cover here, as they’re the more talented squad.