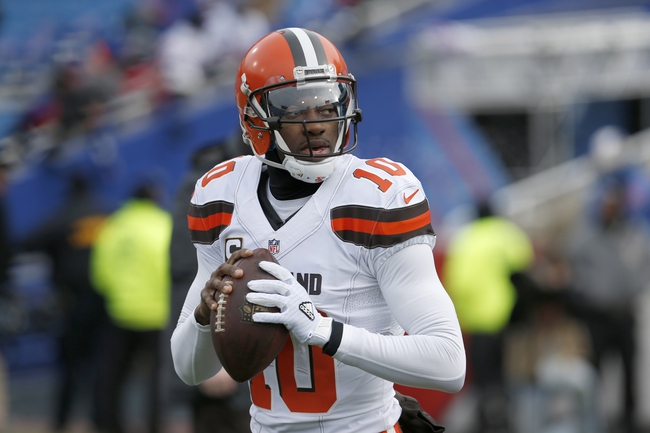 The Cleveland Browns are still looking for their first regular season win since December 13 of 2015. The Cleveland Browns have lost eight straight home games. Robert Griffin III is completing 50 percent of his passes for 490 yards, zero touchdowns and two interceptions. RGIII has 82 pass attempts under his belt this season. Terrelle Pryor Sr. and Gary Barnidge have combined for 1,407 receiving yards and five touchdowns while Duke Johnson Jr. has 51 receptions. The Cleveland Browns ground game is averaging 96.9 yards per contest, and Isaiah Crowell leads the way with 746 yards and five touchdowns. Defensively, Cleveland is allowing 29.1 points and 400.8 yards per game. Christian Kirksey leads the Cleveland Browns with 126 tackles, Emmanuel Ogbah has 5.5 sacks and Jamar Taylor has two interceptions.

Call me crazy, but this could be the game where the Cleveland Browns finally get in the win column. The San Diego Chargers aren't playing for anything and the last thing they want is to leave sunny Cali for freezing Cleveland where the weather is sure to be horrible. The Chargers also have serious road struggles that date back to last season and have a quarterback in Rivers who has been extremely turnover prone this season. Yes, the Browns are awful, but this is their last chance to avoid an 0-16 season, as there's no chance they win in Pittsburgh next week. I'm just not real confident in the Chargers on the road.

I'll take the Browns and my free six points and may even sprinkle the moneyline as well.