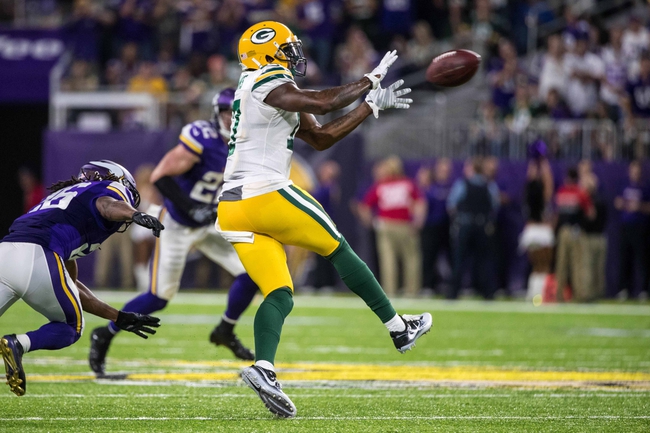 The Green Bay Packers and the Minnesota Vikings face off on Saturday in NFL Wek 16 NFC North action.

The Green Bay Packers are 8-6 this season and they sit in second place in the NFC North behind the Detroit Lions. The Packers offense is averaging 25.9 points and 364.6 yards per game and they are plus 5 in turnover ratio. Green Bay QB Aaron Rodgers has completed 64.9 percent of his passes with 32 touchdowns and 7 interceptions and he has rushed for 314 yards and 3 touchdowns but he has been hampered by a hamstring injury. Ty Montgomery has taken over as the Packers main option running the football and he has 390 yards and 3 touchdowns and Jordy nelson is the top receiver with 82 catches and 12 touchdowns. Defensively the Packers are allowing 24.2 points and 354.9 yards per game with 16 interceptions, 8 fumble recoveries, and 34 sacks. Morgan Burnett is the Packers leading tackler with 82, Jake Ryan has 71, and Julius Peppers has 7.5 sacks. The Packers have looked shaky most of the time this year but they have put themselves in position to at least have a shot at making the playoffs.

The Minnesota Vikings are 7-7 this season as they have watched a fast start of the year turn into a disappointing finish. The Vikings offense has struggled averaging 18.9 points and a 31st ranked 301.5 yards per game and they are plus 9 in turnover ratio. Minnesota QB Sam Bradford has completed 71.6 percent of his passes with 14 touchdowns and 4 interceptions but at this point given the team’s record it is tough to justify what the Vikes gave up to get him. Adrian Peterson is back in the lineup as the Vikings running back and he usually plays well against the Packers while Stefon Diggs is the top receiver with 80 catches and 2 touchdowns. The Minnesota defense is allowing 18.5 points and 311.5 yards per game with 12 interceptions, 12 fumble recoveries, and 35 sacks. Eric Kendricks is the Vikings leading tackler with 88, Harrison Smith has 84 tackles, and Danielle Hunter has 10.5 sacks. This has been a disappointing season for the Vikings after having so much hope at several points of the season.

Minnesota will need to take advantage of Green Bay’s defensive issues but I see the Packers having an issue running the football making them one dimensional. This should be a close game so I will take the points as they could factor.