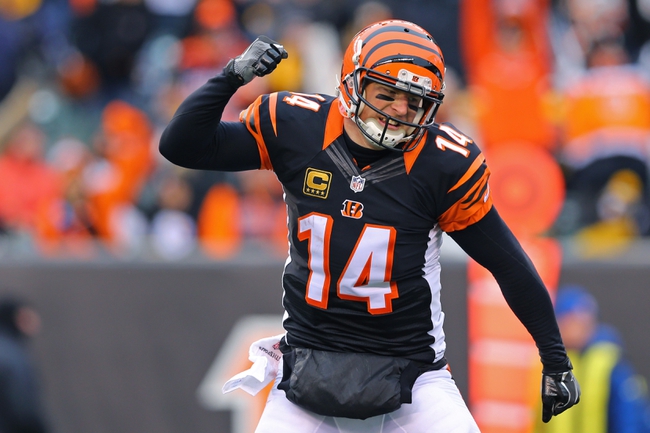 Coming up on Saturday, December 24 in Week 16 NFL action from NRG Stadium, the Cincinnati Bengals and the Houston Texans will be meeting up.

Cincinnati enters play here with a 5-8-1 record so far. The Bengals have won two of their last three games, but are coming off a 24-20 loss to the Steelers in their last appearance. In that game, Bengals QB Andy Dalton threw for just 157 yards, no scores and one interception.

So far this year, Dalton holds 3712 yards, 16 touchdowns and seven interceptions, while Jeremy Hill is the Bengals’ rush leader on 831 yards and nine touchdowns on 215 attempts. AJ Green is Cincinnati’s receiving leader with 964 yards and four touchdowns on 66 receptions.

As for Houston, they’re sitting on an 8-6 record this season and have won two in a row after a three-game losing streak. In their last game, a 21-20 win over Jacksonville on Sunday, Houston RB Lamar Miller posted 22 carries for 63 yards and a TD.

This season, Brock Osweiler leads the Texans on 2704 yards, 14 touchdowns and 16 interceptions, while Miller has put up 268 carries, 1073 yards and five touchdowns. DeAndre Hopkins in Houston’s top receiver with 68 receptions, 788 yards and four scores.

Houston has quite a bit more to play for here than Cincinnati does, as the Bengals are probably giving up at this point. The Texans will be going with Tom Savage at QB over an ineffective Osweiler, so there are some question marks (well, more than usual) with the Houston offense. That said, I think the Texans can cover here with a strong defensive effort, but it’s probably a game to stay away from if you’re betting.