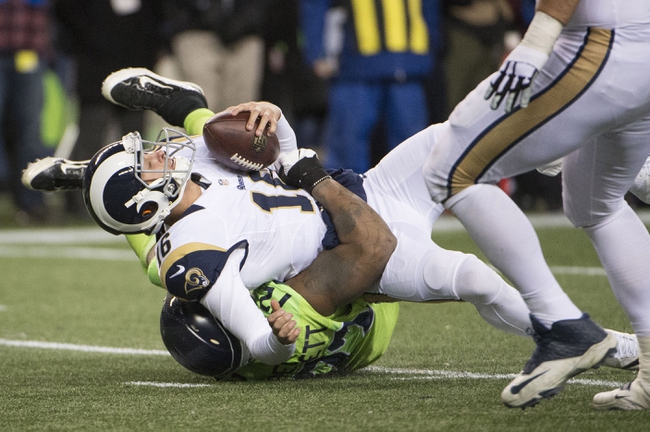 The Los Angeles Rams and the San Francisco 49ers face off on Saturday in Week 16 NFL NFC West action.

The Los Angeles Rams are 4-10 this season and are struggling badly. The Rams offense is the worst in the NFL averaging 14.1 points and 278.8 yards per game and they are minus 10 in turnover ratio. Los Angeles QB Jared Goff has completed 54.7 percent of his passes with 4 touchdowns and 5 interceptions. Todd Gurley is the Rams leading rusher with 778 yards and 5 touchdowns and Kenny Britt is the top receiver with 67 receptions and 5 touchdowns. The Rams defense is allowing 23.4 points and 337.5 yards per game with 7 interceptions, 9 fumble recoveries, and 26 sacks. Alec Ogletree leads the Rams with 124 tackles, Mark Barron has 109 tackles, and Lamarcus Joyner has 66 tackles. The Rams appear to be in bad shape and they also don’t have a first-round pick in the upcoming NFL draft.

The San Francisco 49ers are 1-13 this season and they have lost their last 13 games since winning their opener. The 49ers offense is averaging 18.9 points and 311 yards per game and they are minus 3 in turnover ratio. San Francisco QB Colin Kaepernick has completed 55.5 percent of his passes with 13 touchdowns and 3 interceptions and he has rushed for 437 yards. Carlos Hyde leads the 49ers in rushing with 950 yards and 6 touchdowns and Jeremy Kerley is the top receiver with 53 catches and 3 touchdowns. The San Francisco defense is allowing a NFL worst 31 points per game and 424.9 yards per game with 8 interceptions, 13 fumble recoveries, and 27 sacks. Antoine Bethea has 96 tackles to lead the Niners, Nick Bellore has 83 tackles, and DeForest Buckner has 5 sacks. The 49ers appear to be in rough shape with not a lot of help in site.