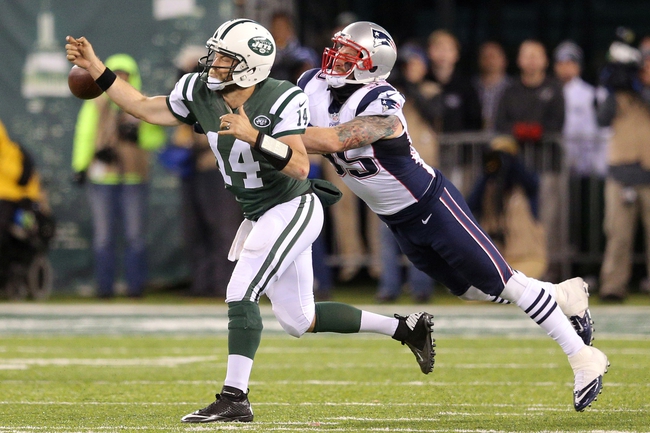 Over at Gillette Stadium in Foxborough on Saturday, December 24, the New York Jets will be visiting the New England Patriots in Week 16 NFL action.

New York comes into this game with an ugly 4-10 record on the season. The Jets’ most recent loss was an embarrassing 34-13 affair against the AFC East rival Dolphins. In that one, New York allowed four touchdowns and 236 yards to Miami’s Matt Moore.

On the year so far, Jets QB Ryan Fitzpatrick leads the Jets statistically with 2364 yards, 10 touchdowns and 15 interceptions. Matt Forte leads New York on 218 attempts, 813 yards and seven touchdowns, while Brandon Marshall is the team’s leading receiver with 57 receptions, 760 yards and three touchdowns.

Over on the Patriots’ side, they’re cruising into Week 16 with a 12-2 record. New England is on a five-game win streak, with the most recent coming against Denver 16-3 this past Sunday. In that one, Patriots QB Tom Brady tossed for just 188 yards, but Dion Lewis cleared 95 yards on 18 carries.

Thus far this season, Brady holds 3064 yards with 22 touchdowns and two picks, while LeGarrette Blount leads the Patriots with 1060 yards and 15 touchdowns. Julian Edelman is New England’s top receiver with 866 yards and two touchdowns on 85 catches.

The Jets and the Patriots have been on opposite courses this year, similar to how things have gone over the last several years. New England at home against a limp Jets team phoning it in at the end of a season, obviously, brings about a very thick line. New York has been completely inept in scoring this year, and there’s no reason to think they’ll get anywhere close here. I’ll take the Patriots to cover.