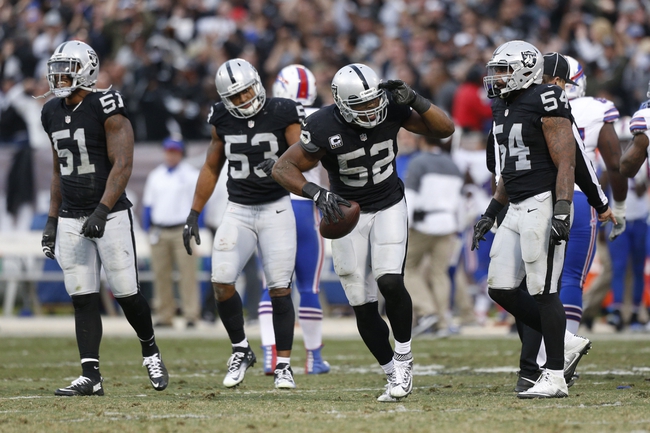 The Oakland Raiders and the Indianapolis Colts face off on Saturday in Oakland in a week 16 NFL battle with big playoff implications.

The Oakland Raiders are 11-3 this season and they sit in first place in the AFC West and are looking at a first-round bye in the playoffs. The Raiders offense has been explosive averaging 26.9 points and 377.8 yards per game and they are plus 15 in turnover ratio. Oakland QB Derek Carr has completed 63.5 percent of his passes with 25 touchdowns and 6 interceptions. Latavius Murray leads the Raiders rushing attack with 737 yards and 12 touchdowns and Michael Crabtree has 77 receptions and 8 touchdowns and Amari Cooper has 74 catches and 4 touchdowns. The Raiders defense is allowing 24 points and 375.9 yards per game with 13 interceptions, 18 fumble recoveries, and 25 sacks. Malcolm Smith leads Oakland with 83 tackles, Khalil Mack has 65 tackles and 11 sacks, and Bruce Irvin has 7 sacks. The Raiders haven’t been spectacular but nearly every week they have done what it takes to win.

The Indianapolis Colts are 7-7 this season and they sit in 3rd place in the AFC South and the playoffs appear to be a reach at this point. The Colts offense is averaging 25.9 points and 361.1 yards per game and they are minus 2 in turnover ratio. Indianapolis QB Andrew Luck has completed 63.7 percent of his passes with 27 touchdowns and 10 interceptions and he has rushed for 312 yards. Frank Gore is the Colts leading rusher with 891 yards and 4 touchdowns and T.Y. Hilton is the top receiver with 81 catches and 6 touchdowns. Defensively the Colts are allowing 24.2 points and 370.9 yards per game with 8 interceptions, 12 fumble recoveries, and 30 sacks. D’Qwell Jackson leads the Colts defense with 78 tackles, Mike Adams has 67 tackles, and Erik Walden has 10 sacks. The Colts still seem to have too many holes to fill and just not enough depth.

The Raiders have a nice record but a lot of those wins have been close and this one should be a close game as well so I am taking the points.