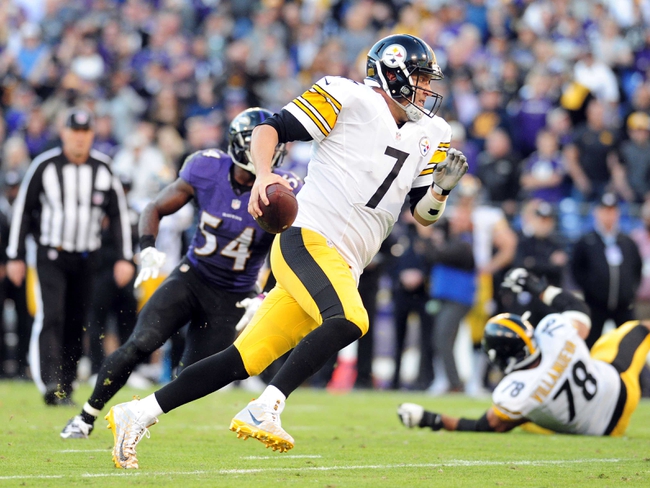 The AFC North title and a guaranteed ticket to the playoffs hangs in the balance as the Pittsburgh Steelers host the Baltimore Ravens on Sunday afternoon.

The Baltimore Ravens will look to stay hot with a 6th win in their last 8 games. They defeated the Philadelphia Eagles in week 15 by the narrowest of margins, 27-26 the final score. Joe Flacco completed 16 of his 30 pass attempts for 206 yards, 2 touchdowns and an interception while being sacked 3 times on the day. Terrance West led the Ravens ground attack with 13 carries for 77 yards, while Kenneth Dixon racked up 36 yards and a touchdown on his 9 carries. Mike Wallace led the Ravens with 60 receiving yards on a pair of catches, while the aforementioned West caught 4 passes out of the backfield for 45 yards. Steve Smith Sr. and Kamar Aiken both logged touchdowns in the win. It was a decent outing for the Ravens’ defense, as they held the Eagles to just 328 yards of total offense, including just 169 yards through the air for Philly QB Carson Wentz, while sacking and picking him off once respectively.

The Pittsburgh Steelers are hoping to put the icing on the cake with a 6th straight win that would clinch the division title. Pittsburgh got one step closer with a come from behind 24-20 victory over the Cincinnati Bengals. Ben Roethlisberger threw for 286 yards and a touchdown in completing 21 of 36 pass attempts. LeVeon Bell rushed for 93 yards on 23 carries to lead the Pittsburgh ground game. Eli Rogers led the Steelers receiving core with 75 yards and a touchdown on 5 catches, while Ladarius Green used his 5 catches for 72 yards and Antonio Brown caught 3 balls for 58 yards. Chris Boswell accounted for 75% of the Steelers points in the win, making all 6 of his field goal attempts in the win. Defensively, the Steelers held Cincinnati to just 222 yards of total offense, while picking off Andy Dalton once and registering a sack on the Bengals QB.

This is a hard one to call, as anything could happen with the division crown up in the air. However, these two teams are trending in different directions in terms of momentum. Baltimore almost blew a late lead to the Eagles while the Steelers came back from 14 points down to get the win. Surely that has to do something for your mindset going into the biggest game of the year, so I’ll side with the Steelers here but not by much more than a touchdown.