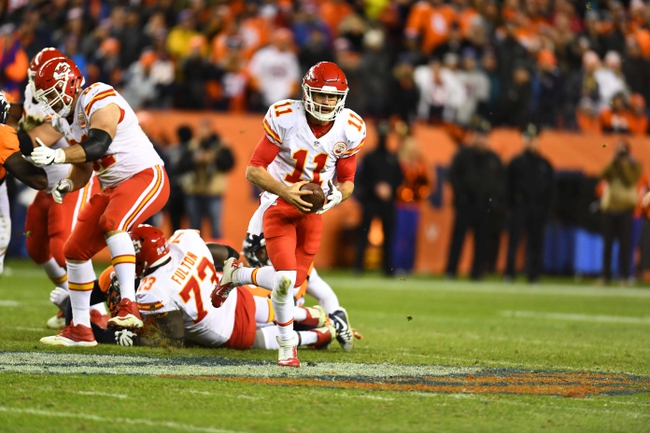 The Denver Broncos travel to Arrowhead to take on the Kansas City Chiefs in a crucial AFC West matchup in week 16 NFL action.

The Denver Broncos will be looking to snap a mini 2-game losing streak when they face the Chiefs. The Broncos had no answer for New England as the Broncos fell to the Pats by a final score of 16-3. Trevor Siemian threw for 282 yards and an interception while being sacked 4 times in the loss. Justin Forsett led the Broncos ground attack with just 37 yards on his 10 carries. Demaryius Thomas led the Broncos with 91 yards on 7 receptions while Emmanuel Sanders came 2nd with 3 catches for 48 yards. Defensively, it’s not often that you hold Tom Brady to just 188 yards through the air and still end up on the losing end, but that’s exactly what happened to the Broncos here as Dion Lewis and Legarrette Blount combined for 126 yards and a touchdown on 35 carries which was more than enough scoring for New England as Denver mustered through just a single field goal in the loss.

The Kansas City Chiefs will look for a 4th win in 5 games to try to bounce back from last week’s heartbreaking loss to the Titans by a final score of 19-17. Alex Smith completed just 15 of his 28 pass attempts for 163 yards and an interception while being sacked just once on the day. Spencer Ware led the Chiefs backfield with 69 rushing yards on 18 carries while Tyreek Hill needed just one carry to put up 68 yards and a touchdown. Alex Smith also called his own number 4 times for 11 yards and a score of his own. Jeremy Maclin caught a team-high 6 passes for 82 yards while no other Kansas City receiver caught more than 3 passes in the loss. Defensively, the Chiefs had an average game, as they allowed 389 yards of total offense, despite picking off Titans QB Marcus Mariota once and sacking him once on the day while forcing a pair of fumbles out of the hands of Mariota and receiver Rishard Matthews.

This should be an entertaining game that should come down to the wire. However, Kansas City has a solid defense, a better one than New England’s in my opinion, and if Denver struggles early, this one has the potential to be over earlier than anticipated. Both of these teams have playoff implications on the line, so with that in mind, I think Kansas City and the low line is the play as I just can’t get myself to trust the Broncos offensively.