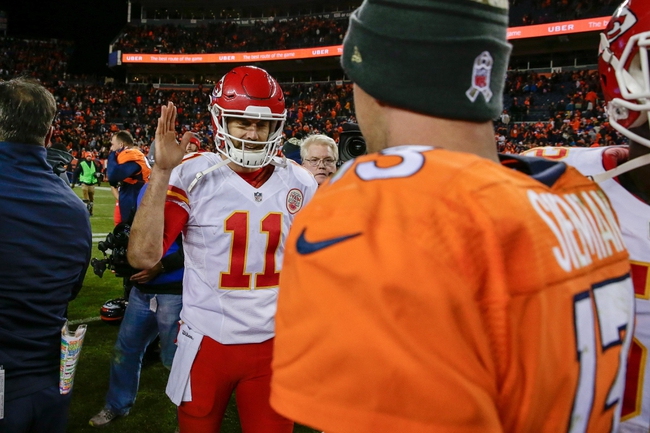 The Denver Broncos look for their ninth victory of the season to remain in the AFC wild card race. The Denver Broncos have won 10 of their last 15 road games. Trevor Siemian is completing 61.3 percent of his passes for 3,012 yards, 16 touchdowns and eight interceptions. Siemian has one or less touchdown pass in six of his last nine games. Demaryius Thomas and Emmanuel Sanders have combined for 2,022 receiving yards and 10 touchdowns while Virgil Green has 19 receptions. The Denver Broncos ground game is averaging 91.3 yards per contest, and Devontae Booker leads the way with 528 yards and three touchdowns. Defensively, Denver is allowing 18.4 points and 310.9 yards per game. T.J. Ward leads the Denver Broncos with 87 tackles, Von Miller has 13.5 sacks and Darian Stewart has three interceptions.

The Kansas City Chiefs clinch a playoff spot with a victory here and haven't lost back-to-back games in over a year. Also, while the Broncos defense is elite, the Chiefs have managed to score a combined 83 points in their last three games against that defense. The Broncos offense simply isn't scaring anybody and that's especially the case against this Chiefs defense in Kansas City. This game could get ugly for the Broncos due to their inability to find the end zone recently. I'll take the Chiefs by a touchdown here.