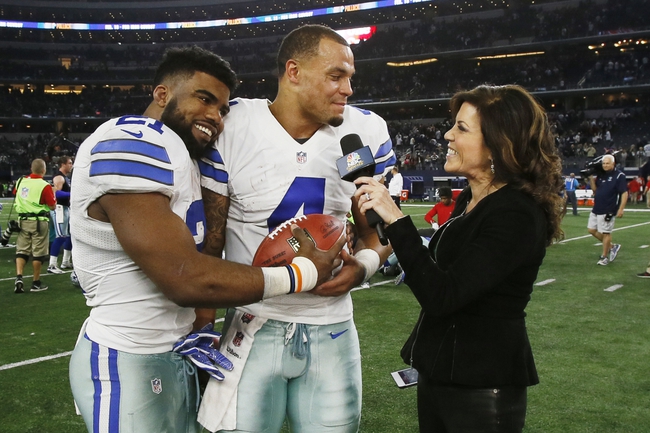 The Detroit Lions and Dallas Cowboys clash Monday night in a key NFC NFL showdown at AT&T Stadium on ESPN.

The Detroit Lions look for their 10th victory of the season to keep their lead in the NFC North division. The Detroit Lions have won double-digit games 10 times in franchise history. Matthew Stafford is completing 66.3 percent of his passes for 3,720 yards, 22 touchdowns and eight interceptions. Stafford has one or less touchdown pass in six of his last eight games. Golden Tate and Marvin Jones have combined for 1,780 receiving yards and seven touchdowns while Eric Ebron has 47 receptions. The Detroit Lions ground game is averaging 81.7 yards per contest, and Theo Riddick leads the way with 357 yards and one touchdown. Defensively, Detroit is allowing 20.4 points and 346.6 yards per game. Tahir Whitehead leads the Detroit Lions with 119 tackles, Kerry Hyder has eight sacks and Tavon Wilson has two interceptions.

The Dallas Cowboys look for their 13th victory of the season to keep their edge heading into the playoffs. The Dallas Cowboys have won 13 games just twice in franchise history. Dak Prescott is completing 67.7 percent of his passes for 3,418 yards, 20 touchdowns and four interceptions. Prescott has one or less touchdown pass in four straight games. Cole Beasley and Dez Bryant have combined for 1,485 receiving yards and 11 touchdowns while Jason Witten has 66 receptions. The Dallas Cowboys ground game is averaging 154.5 yards per contest, and Ezekiel Elliott leads the way with 1,551 yards and 13 touchdowns. Defensively, Dallas is allowing 18.4 points and 345.6 yards per game. Sean Lee leads the Dallas Cowboys with 140 tackles, Tyrone Crawford has 4.5 sacks and Barry Church has two interceptions.

The Dallas Cowboys are winning and getting all of the headlines, but a lot of their games have been closer than the score indicated and Prescott isn't exactly playing the way he was earlier in the season. Well, the kings of close games this season have been the Detroit Lions, as 11 of their 14 games were decided by one score. The Lions find ways to hang around and have done a great job of pulling out victories as well. Stafford should also be more comfortable in this game with his banged up middle finger than he was in New York with the cold and rain. Also, the Lions have more to play for with the NFC North still up in the air and a possible No. 2 seed, while the Cowboys have a bye wrapped up.

I'll take my chances with my free touchdown and the Detroit Lions.