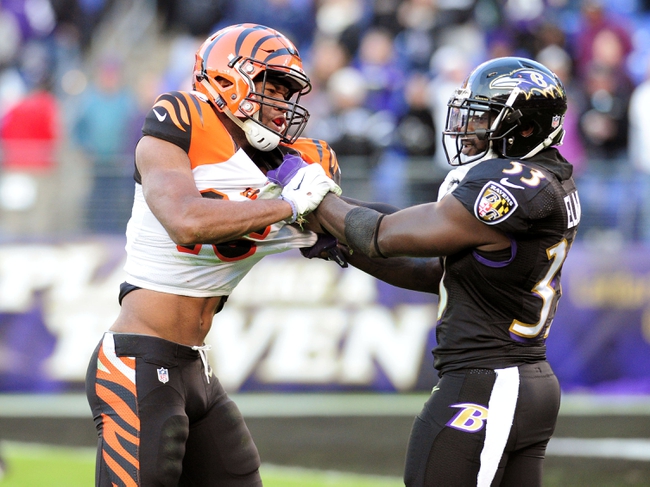 The Cincinnati Bengals and the Baltimore Ravens face off on Sunday in Week 17 NFL AFC North action.

The Cincinnati Bengals are 5-9-1 this season and their run of years of making the playoffs will come to an end after a season filled with injuries. The Bengals are averaging a 23rd ranked 19.9 points per game and a 14th ranked 356 yards per game and they have a plus 1 turnover ratio. Cincinnati QB Andy Dalton has completed 64.7 percent of his passes with 17 touchdowns and 8 interceptions. Jeremy Hill leads the Bengals rushing attack with 839 yards and 9 touchdowns and with A.J. Green out Brandon LaFell is the Bengals top receiver with 57 catches and 6 touchdowns. The Cincinnati defense has allowed a n 11th ranked 20.3 points per game and a 17th ranked 351.8 yards per game with 15 interceptions, 6 fumble recoveries, and 30 sacks. Karlos Dansby is the Bengals top tackler with 103, Geno Atkins has 8.5 sacks, and George Iloka and Dre Kirkpatrick have 3 interceptions each. The Bengals are disappointed with their results this season but their free agent departures and injures were just too much to overcome.

The Baltimore Ravens are 8-7 this season and after losing last week to the Pittsburgh Steelers in a thriller, they were eliminated from playoff contention. The Bengals offense is 19th in points per game at 22.2 and 18th in yards per game at 348.5 and they have a plus 7 turnover ratio. Baltimore QB Joe Flacco has completed 64.8 percent of his passes with 20 touchdowns and 14 interceptions. Terrance West is the Ravens top rusher with 756 yards and 5 touchdowns and tight end Dennis Pitta is the top receiver with 75 catchers and 2 touchdowns. The Baltimore defense has been outstanding allowing a 7th best in the NFL 19.6 points per game and a 5th ranked 318.9 yards per game with 18 interceptions, 14 fumble recoveries, and 30 sacks. Zach Orr is the Ravens top tackler with 132, Eric Weddle has 85 tackles, C.J. Mosley has 80 tackles, and Terrell Suggs has 8 sacks. The Ravens had the Steelers on the ropes and came up just short but don’t expect them to lack motivation in this rivalry game.

This should be a hard fought game and I don’t expect wither team to quit and I see the Bengals getting the best of it at home but it isn’t a paly I am overly confident about.