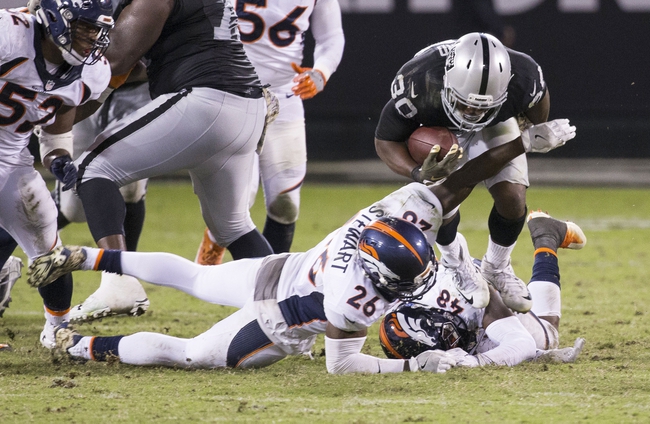 Coming our way on Sunday, January 1 in Week 17 NFL action from the AFC West, we’ve got a great rivalry game coming at Sports Authority Field between the Oakland Raiders and the Denver Broncos.

Oakland comes in with a nice 12-3 record this year, and they’ve won eight of their last nine games. Disaster struck during the Raiders’ last game (a 33-25 win) against Indianapolis, however, as starting QB Derek Carr was lost for the rest of the year with a broken leg.

Before getting injured, Carr provided the Raiders with 3933 yards, 28 touchdowns and six picks, while Latavius Murray leads the team on 190 carries for 777 yards and 12 TDs. Oakland’s top receiver this year is Amari Cooper, with 78 catches for 1110 yards and four touchdowns.

As for the Broncos, they’re coming into this matchup with an 8-7 mark on the season. Denver has been in a tailspin of late, losing their last three games straight. The Broncos’ latest loss came 33-10 against Kansas City in Week 16, during which Denver QB Trevor Siemian tossed 17-of-43 for 183 yards, no scores and a pick.

On the year, Siemian has produced 3195 yards with 16 touchdowns and nine picks for the Broncos, while Devontae Booker leads the team in rushing with 555 yards and three scores on 160 attempts. Demaryius Thomas is Denver’s leading receiver with 86 receptions for five touchdowns and 1036 yards.

If not for the Carr injury, I’d pick this as a pretty straightforward Oakland win. As it stands now, Oakland has to rely on a largely unproven Matt McGloin for their playoff lives. That’s asking quite a bit, but we’ll get to see what McGloin is made of here, and maybe he can keep the Raiders’ heads above water at least. Given the uncertainty I’d stay away from this game, but I like the Broncos to cover here.

The pick in this article is the opinion of the writer, not a Sports Chat Place site consensus.
Previous Pick
Rex Ryan Fired: Five Buffalo Bills Coaching Candidates
Next Pick
Minnesota Vikings vs. Chicago Bears - 1/1/17 NFL Pick, Odds, and Prediction