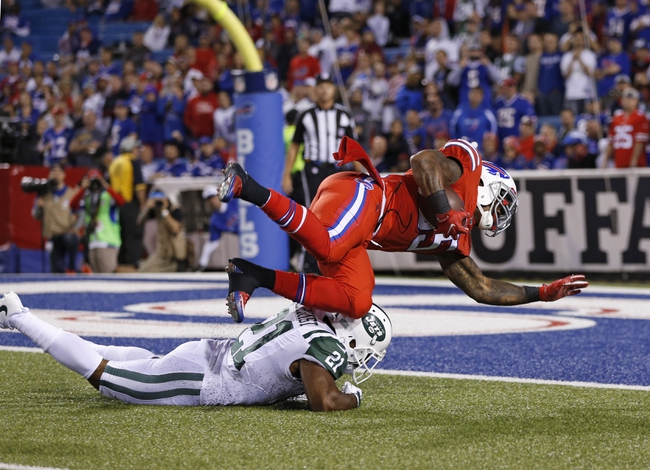 The New York Jets and the Buffalo Bills face off on Sunday as the close out their seasons in a week 17 NFL AFC East match up.

The New York jets have had a miserable season and have looked like a team lacking any kind of direction. The Jets offense has been one of the worst in the NFL averaging just 16.3 points per game which ranks 30th while gaining 329.3 yards per game but their real undoing is a miserable minus 3 turnover ratio. Jets QB Ryan Fitzpatrick was benched but he is back in due to an injury to Bryce Petty but his key numbers are 17 interceptions and 10 touchdown passes. Matt Forte has been productive for the Jets rushing for 813 yards and 7 touchdowns and catching 30 passes while Brandon Marshall has 59 catches and 3 touchdowns and Quincy Enunwa has 53 catches and 4 touchdowns. The Jets defense has been hung out to dry by the offense allowing a 29th ranked 26.6 points per game despite being just 16th in yards allowed per game at 349.9 with 7 interceptions, 12 fumble recoveries, and 24 sacks. David Harris is the Jets leading tackler with 87, Leonard Williams is an emerging superstar with 66 tackles and 7 sacks, and Darron Lee has 66 tackles. The Jets have a lot of holes and I am not sure they can cover all of it in one offseason.

The Buffalo Bills are 7-8 this season but while failing to end their 17-yar playoff drought, head coach Rex Ryan was fired this week and offensive coordinator Anthony Lynn will be the interim head coach for this week’s game. The Bills offense is averaging a 7th ranked 25.9 points and a 12th ranked 362.4 yards per game and they are plus 9 in turnover ratio. The Bills will sit QB Tyrod Taylor this week and E.J. Manuel will get the start and while Manuel has seen little action the former first round pick has not looked impressive in his previous action. Bills running back LeSean McCoy is one of the best backs in the NFL rushing for 1,257 yards and 13 touchdowns and catching 49 passes out of the backfield while tight end Charles Clay has been the top receiver catching 54 passes with 4 touchdowns. Defensively the Bills are 15th in the NFL in points allowed per game at 23.2 and 19th in yards allowed at 358.9 with 12 interceptions, 11 fumble recoveries, and 38 sacks. Zach Brown is the Bills top tackler with 138, Preston Brown has 125 tackles, Lorenzo Alexander has 11.5 sacks, and Stephon Gilmore has 5 interceptions. While the Bills roster is loaded with top tier players they don’t look close to being a contender.

The Jets are home but the Bills have much more talent and are the better team. I don’t like either QB, in fact either of the m are fully capable of losing the game by themselves, but I see the Bills getting the  win and cover but it is a lean at best.