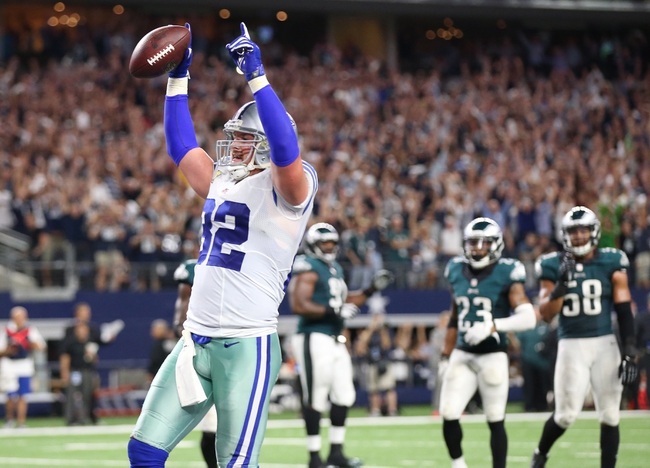 Coming up on Sunday, January 1 from Lincoln Financial Field in Week 17 NFL action, the Dallas Cowboys will be taking on the Philadelphia Eagles.

Dallas enters this game with a 13-2 record on the season, and they’ve won their last two games. That includes a 42-21 drubbing of the Lions on Monday, during which Dallas QB Dak Prescott tossed 212 yards and three touchdowns.

So far this season, Prescott has tossed for 3630 yards and 23 touchdowns with four picks, and RB Ezekiel Elliott leads the ground game for the Cowboys on 1631 yards and 15 touchdowns on 322 attempts. Des Bryant leads the Cowboys in receiving with 50 catches for 796 yards and eight scores.

Over on the Philadelphia side, they’re coming into this matchup with a 6-9 mark on the season. The Eagles have lost five of their last six games, and nine of their last 11 overall. The good news is that Philly got a win over the Giants in week 16, 24-19. In that one, the Eagles allowed 356 yards and a TD to the Giants’ Eli Manning, but also picked him off three times.

So far this year, QB Carson Wentz leads the Eagles with 3537 yards, 14 touchdowns and 14 picks, while Ryan Mathews is the lead rusher on 661 yards and eight touchdowns. Jordan Matthews gets high-man honors among the Philadelphia receivers with 804 yards and three scores on 73 receptions.

Under normal circumstances, this would be considered a relatively easy Cowboys cover. This being Week 17 and with Dallas having very little to gain, however, the situation changes. I doubt the Cowboys will keep Prescott, Elliott, or any of their other key players on the field for too long, which opens up the door for an Eagles cover. I’ll take Philly here.