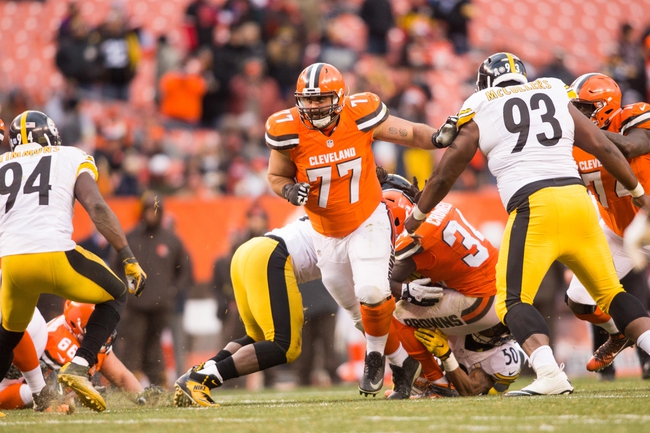 Headed our way from Heinz Field on Sunday, January 1, we’ve got AFC North NFL action in Week 17 between the Cleveland Browns and the Pittsburgh Steelers.

Cleveland limps into this game with a putrid 1-14 record on the year. The Browns lost 14 in a row to start the season, but miraculously defeated San Diego 20-17 on Christmas Eve. In that game, Browns RB Isaiah Crowell bagged 16 carries for 54 yards and two touchdowns.

On the year so far, Cody Kessler is still Cleveland’s leading passer with 1380 yards, six scores and two picks, while Crowell leads the rushers on 179 attempts for 800 yards and seven TDs. Terrelle Pryor is tops in the Cleveland receiving game with 70 catches for 913 yards and four scores.

As for the Steelers, they’re entering play here with a 10-5 record, and have won six in a row. The Steelers’ latest win came in Week 16 against Baltimore in a 31-27 nail-biter. In that one, Pittsburgh RB Le’Veon Bell rushed for 122 yards and a TD on 20 carries.

On the season, Steelers QB Ben Roethisberger has posted 3819 yards, 29 touchdowns and 13 picks, while Bell is tops in the running game on 261 attempts, 1268 yards and seven scores. Antonio Brown is Pittsburgh’s leading receiver this year with his 106 catches, 1284 yards and 12 touchdowns.

The playoff scenarios are all set here: the Steelers are locked into the No. 3 seed, and Cleveland, obviously, isn’t going anywhere. The question then becomes how long the starters will play in this one, and with Pittsburgh having very little to gain with a victory I don’t think they’ll risk leaving Roethlisberger, Bell and Brown out there for too long. That said, Cleveland isn’t even going to beat the Steelers’ second and third units. I like the Browns to cover here, but this should be a Steelers win.