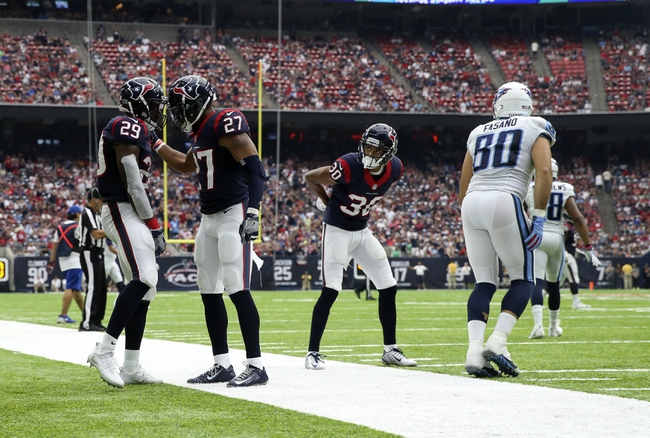 The Houston Texans look for their 10th victory of the season after winning the AFC South. The Houston Texans have just two double-digit winning seasons in franchise history. Tom Savage is completing 63.1 percent of his passes for 436 yards, zero touchdowns and zero interceptions. Savage enters this game with 65 pass attempts under his belt this season. DeAndre Hopkins and Will Fuller V have combined for 1,442 receiving yards and six touchdowns while C.J. Fiedorowicz has 52 receptions. The Houston Texans ground game is averaging 120.9 yards per contest, and Lamar Miller leads the way with 1,073 yards and five touchdowns. Defensively, Houston is allowing 20.3 points and 305.7 yards per game. Benardrick McKinney leads the Houston Texans with 128 tackles, Whitney Mercilus has 7.5 sacks and Quintin Demps has five interceptions.

The Tennessee Titans look for a feel good victory to end the season with nine wins. The Tennessee Titans have not won nine games since the 2011 NFL season. Matt Cassel is completing 56 percent of his passes for 134 yards, one touchdown and one interception. Cassel has 25 pass attempts under his belt this season. Rishard Matthews and Delanie Walker have combined for 1,596 receiving yards and 15 touchdowns while Tajae Sharpe has 41 receptions. The Tennessee Titans ground game is averaging 138.9 yards per contest, and DeMarco Murray leads the way with 1,266 yards and nine touchdowns. Defensively, Tennessee is allowing 24.1 points and 362.1 yards per game. Avery Williamson leads the Tennessee Titans with 96 tackles, Brian Orakpo has 10.5 sacks and Perrish Cox has three interceptions.

I'm not sure why the Texans are underdogs in this spot, but I'll gladly take the better team and the free field goal. The injury to Marcus Mariota leavs Cassel at quarterback, a guy who couldn't do anything last year with the Dallas Cowboys despite playing behind the best offensive line in football. Also, coach Bill O'Brien said the Texans will not rest their starters despite already clinching the AFC South. So, this line is a little confusing to me. Either way, the Texans should win outright, which makes getting free points the obvious play here.