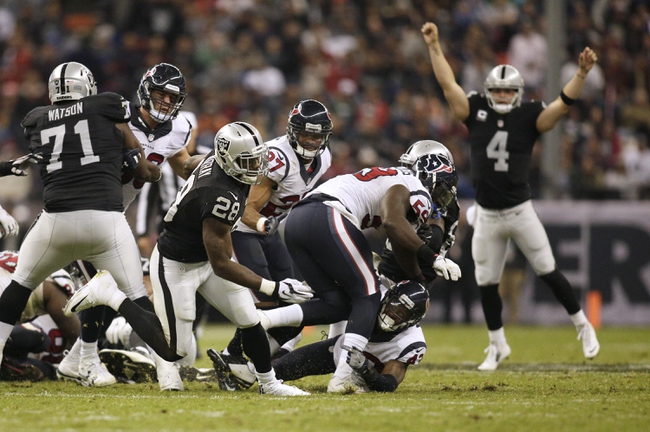 The Oakland Raiders look to advance to the divisional round after winning 12 games in the competitive AFC West. The Oakland Raiders haven’t won a playoff game since the 2002 NFL season. Connor Cook is completing 66.7 percent of his passes for 150 yards, one touchdown and one interception. Matt McGloin is questionable for this game due to a shoulder injury. Amari Cooper and Michael Crabtree have combined for 2,156 receiving yards and 13 touchdowns while Seth Roberts has 38 receptions. The Oakland Raiders ground game is averaging 120.1 yards per contest, and Latavius Murray leads the way with 788 yards and 12 touchdowns. Defensively, Oakland is allowing 24.1 points and 375.1 yards per game. Malcolm Smith leads the Oakland Raiders with 103 tackles, Khalil Mack has 11 sacks and Reggie Nelson has five interceptions.

The Houston Texans look to reach the divisional round after winning the AFC South with nine wins. The Houston Texans also look for their third playoff victory in franchise history. Tom Savage is completing 63 percent of his passes for 461 yards, zero touchdowns and zero interceptions. Savage is questionable for this game due to a concussion. DeAndre Hopkins and Will Fuller V have combined for 1,589 receiving yards and six touchdowns while C.J. Fiedorowicz has 54 receptions. The Houston Texans ground game is averaging 116.2 yards per contest, and Lamar Miller leads the way with 1,073 yards and five touchdowns. Defensively, Houston is allowing 20.5 points and 301.3 yards per game. Benardrick McKinney leads the Houston Texans with 129 tackles, Whitney Mercilus has 7.5 sacks and Quintin Demps has six interceptions.

The Texans and Raiders met back in November, a game Oakland won 27-20 in Mexico City. In that game, the Texans actually had six more first downs than the Raiders and allowed just 30 rushing yards. There were also a couple of blown calls that went the Raiders way. When you take everything that happened in that game and add the fact the Raiders are playing a second string (possible third string) quarterback, you have to like the Texans in this game. Look for Houston's defense to dominate this contest and for the Texans offense to do just enough to get the win and cover.