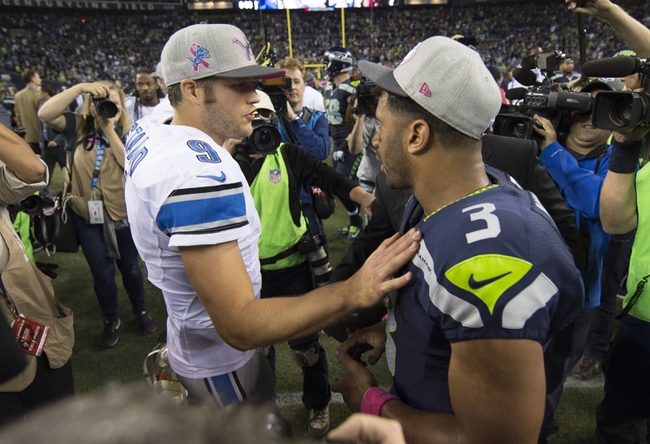 The Detroit Lions enter the playoffs on a three-game losing streak and blowing a chance to win the NFC North. The Detroit Lions look for their first playoff victory since the 1991 NFL season. Matthew Stafford is completing 65.3 percent of his passes for 4,327 yards, 24 touchdowns and 10 interceptions. Stafford has one or less touchdown pass in five of their last seven games. Golden Tate and Marvin Jones have combined for 2,007 receiving yards and eight touchdowns while Eric Ebron has 61 receptions. The Detroit Lions ground game is averaging 81.9 yards per contest, and Theo Riddick leads the way with 357 yards and one touchdown. Defensively, Detroit is allowing 22.4 points and 354.8 yards per game. Tahir Whitehead leads the Detroit Lions with 132 tackles, Kerry Hyder has eight sacks and Tavon Wilson has two interceptions.

The Seattle Seahawks have made the playoffs five straight seasons and won the NFC West with 10 wins. The Seattle Seahawks haven’t been eliminated in a wild card game since the 2004 NFL season. Russell Wilson is completing 64.7 percent of his passes for 4,219 yards, 21 touchdowns and 11 interceptions. Wilson has one or less touchdown pass in five of his last seven games. Doug Baldwin and Jimmy Graham have combined for 2,051 receiving yards and 13 touchdowns while Jermaine Kearse has 41 receptions. The Seattle Seahawks ground game is averaging 99.4 yards per contest, and Christine Michael leads the way with 469 yards and six touchdowns. Defensively, Seattle is allowing 18.3 points and 318.7 yards per game. Bobby Wagner leads the Seattle Seahawks with 167 tackles, Cliff Avril has 11.5 sacks and Richard Sherman has four interceptions.

We all know just how difficult it is to win in Seattle, especially this time of year where CenturyLink Field is an absolute madhouse. This seems like a lot of points to lay, but the Detroit Lions have zero running game, making their offense completely one-dimensional. The Seahawks are going to be able to feast on that and shut Detroit down, making it very tough for Stafford and company to move the ball. The Detroit Lions have scored 21 or less points in four of their last six games and none of those defenses were as good as the Seahawks. Even with Seattle's offensive line issues, this is a game the home team should be able to win by double digits.