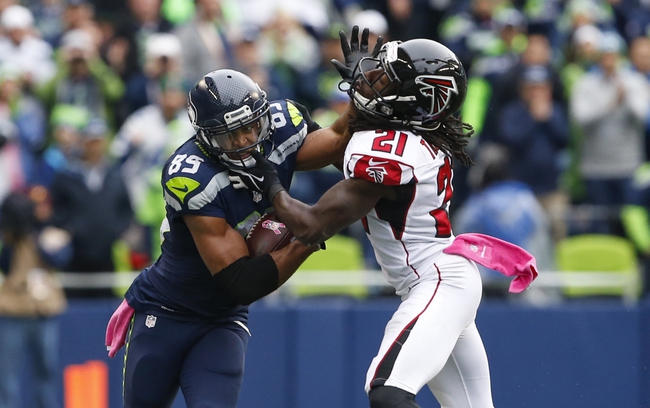 The Seattle Seahawks and Atlanta Falcons meet Saturday afternoon in the NFC divisional playoffs at the Georgia Dome on FOX.

The Seattle Seahawks look for another big playoff win after beating the Detroit Lions last Saturday, 26-6. The Seattle Seahawks hope to get to their third NFC Championship in the last four seasons. In the victory over the Lions, Russell Wilson completed 76.7 percent of his passes for 224 yards and two touchdowns, proving he’s in total control of the Seattle offense and is more than capable of taking his game to the next level. Thomas Rawls also led the Seahawks with 161 rushing yards, while Doug Baldwin and Paul Richardson combined for 152 receiving yards and two touchdowns. If the Seahawks are going to have a ground game these playoffs, their offense is just that much scarier to defend. Defensively, the Seattle Seahawks are who they are and have now won 30 of their last 34 games when allowing 30 or less points. The Seahawks have also allowed seven or less points in three of their last six games.

The Atlanta Falcons enter the playoffs on a four-game winning streak and have had an extra week to prepare after winning the NFC South. The Atlanta Falcons haven’t made the NFC conference championship since the 2004 season. Matt Ryan is completing 69.9 percent of his passes for 4,944 yards, 38 touchdowns and seven interceptions. Ryan has two or more touchdown passes in seven of his last nine games. Julio Jones and Mohamed Sanu have combined for 2,062 receiving yards and 10 touchdowns while Taylor Gabriel has 35 receptions. The Atlanta Falcons ground game is averaging 120.5 yards per contest, and Devonta Freeman leads the way with 1,079 yards and 11 touchdowns. Defensively, Atlanta is allowing 25.4 points and 371.2 yards per game. Deion Jones leads the Atlanta Falcons with 108 tackles, Vic Beasley Jr. has 15.5 sacks and Ricardo Allen has two interceptions.

The Atlanta Falcons have not made the playoffs since the 2012 season and have just one playoff victory since 2011. We know what we're getting with the Seattle Seahawks, a team that seems to be taking yearly trips to the Super Bowl and has a lights out defense that travels well. Also, the Falcons haven't played a team with a winning record since December 4. I know the Falcons are rested and the October meeting between the Seahawks and Falcons had some questionable calls that didn't go Atlanta's way. So, there will be extra motivation for the Falcons in this contest. However, this is a lot of points to be giving the Seahawks given just how money they've been over the years, especially in the playoffs. The value is with the Seahawks and the points in a game they can win outright.