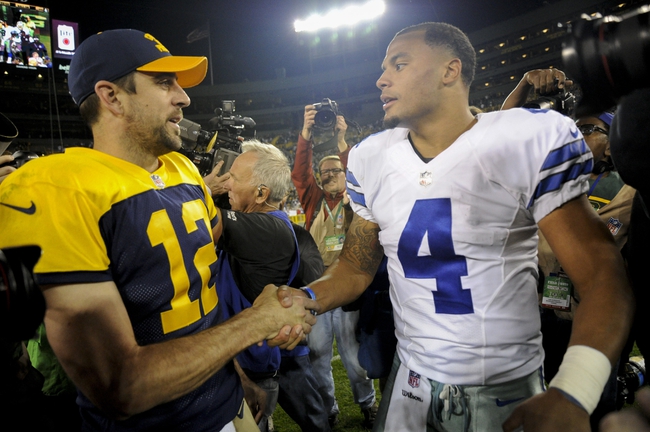 The Green Bay Packers and Dallas Cowboys meet Sunday in the NFL NFC divisional playoffs at AT&T Stadium on FOX.

The Green Bay Packers enter this game on a seven-game winning streak after beating the New York Giants last week. The Green Bay Packers hope to make the NFC championship for the second time in three years. In the Packers win over the Giants, Aaron Rodgers had four touchdown passes and now has 12 touchdown passes in his last three games overall. Davante Adams and Randall Cobb combined for 241 receiving yards and four touchdowns, while Jordy Nelson had one catch before leaving the game with a rib injury. As long as Rodgers continues to play quarterback at this level, Green Bay may be the scariest team left in the playoffs. Defensively, the Packers improved unit has allowed 13 or less points in four of their last seven games. The Packers have actually won 10 straight games when allowing 27 or less points.

The Dallas Cowboys have won 13 of their last 15 games and had an extra week to prepare after winning the NFC East. The Dallas Cowboys look to make their first conference championship since the 1995 NFL season. Dak Prescott is completing 67.8 percent of his passes for 3,667 yards, 23 touchdowns and four interceptions. Prescott has one or less touchdown pass in four of his last five games. Cole Beasley and Dez Bryant have combined for 1,629 receiving yards and 13 touchdowns while Jason Witten has 69 receptions. The Dallas Cowboys ground game is averaging 149.8 yards per contest, and Ezekiel Elliott leads the way with 1,631 yards and 15 touchdowns. Defensively, Dallas is allowing 19.1 points and 343.9 yards per game. Sean Lee leads the Dallas Cowboys with 145 tackles, Benson Mayowa has six sacks and Barry Church has two interceptions.

The Green Bay Packers did get beat up by the Dallas Cowboys in mid-October, and that was actually the game that started the snowball of bad football, injuries and question marks surrounding the team. I think it's safe to say that the last meeting doesn't hold much weight given how the Packers are playing at this present moment. The bottom line is that the Packers are playing like the Packers we expected to see before the season started, as Rodgers is playing at an MVP level and the defense has improved since getting some guys back from injury. Even with the Cowboys rested and eager to get the monkey off their back, I don't feel comfortable picking against this red hot Green Bay team that's putting truckloads of points on the board. Rodgers is lighting it up, and the Cowboys were 26th in the league this season in passing yards allowed per game. Green Bay will score quite a bit and if it becomes a shootout, I don't have much confidence in Prescott making enough plays to keep up.

I like the Packers to win this thing outright, but I'll take the points just to be safe.