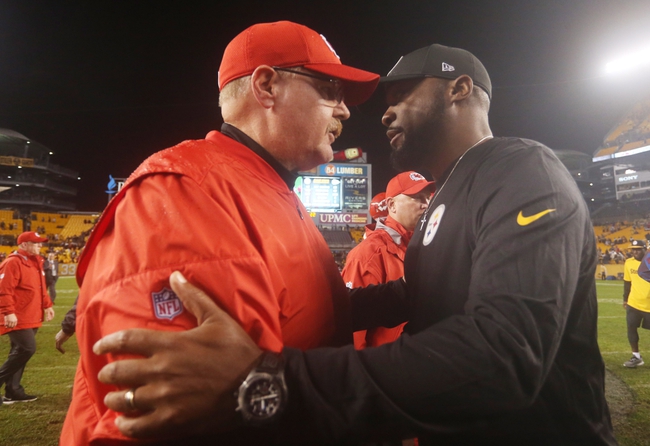 The Pittsburgh Steelers and Kansas City Chiefs meet Sunday in the NFL AFC divisional playoffs at Arrowhead Stadium on NBC.

The Pittsburgh Steelers enter this game on an eight-game winning streak after waxing the Miami Dolphins last Saturday, 30-12. The Pittsburgh Steelers haven’t made the AFC conference championship since the 2010 NFL season. In the win over the Dolphins, Le'Veon Bell set a Steelers postseason record with 167 rushing yards and two touchdowns, simply gashing a Miami defense that entered the game banged up. Ben Roethlisberger completed 72.2 percent of his passes for two touchdowns and two interceptions, while Antonio Brown had 124 receiving yards and two touchdowns on five receptions. The Steelers offense is clearly the driving force of this Pittsburgh team, and they’ve won 21 of their last 23 games when scoring 24 or more points. Defensively, the Steelers have allowed 20 or less points in six of their last eight games.

The same way the Steelers were a different team after the Dolphins beat them in the regular season, the same can be said for the Chiefs, who have won 10 of their last 12 games since losing to Pittsburgh 43-14 back in early October. The Kansas City Chiefs have allowed 21 or less points in nine of their last 12 games and have the secondary to give this Pittsburgh offense problems. Speaking of the Pittsburgh offense, Roethlisberger left the Miami game in a walking boot, which can't be good for his practice schedule this week. Also, coach Andy Reid is 16-2 when having an extra week to prepare. Add the fact Kansas City is never an easy place to win, and you have to give a considerable edge to the Chiefs to win this game.