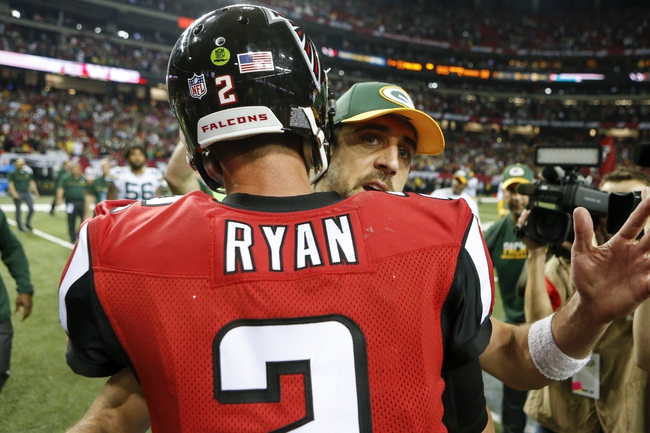 The Green Bay Packers and Atlanta Falcons meet Sunday in the NFL NFC Championship at the Georgia Dome.

The Green Bay Packers look for another road victory after beating the Dallas Cowboys, 34-31. The Green Bay Packers also look for their fourth Super Bowl appearance since the 1996 season. The Packers have relied heavily on their offense down the stretch, as Aaron Rodgers has 718 passing yards and six touchdowns in the first two playoff games and Green Bay has scored a combined 72 points. The Packers have now scored 30 or more points in six straight games and they’ve won nine of their last 10 games when that’s the case. There’s also a chance Jordy Nelson returns from a rib injury, giving help to Davante Adams and Randall Cobb, who have combined for 25 playoff receptions. Defensively, Jake Ryan leads the Packers with 16 tackles, Micah Hyde has one sack and Damarious Randall has one interception. The Packers are allowing 397 yards and 22 points in the postseason.

The Atlanta Falcons look for another victory after beating the Seattle Seahawks, 36-20. The Atlanta Falcons also look for their second Super Bowl appearance and first since the 1998 season. The Falcons are also red hot offensively, scoring no less than 28 points in seven straight games, and they’ve gone 11-2 SU this season when reaching that mark. Matt Ryan has two or more touchdown passes in five straight games and is coming off a contest in which he completed 70.3 percent of his passes. While Julio Jones gets all the attention, Atlanta had four receivers with at least 44 receiving yards in the divisional round. Defensively, Keanu Neal leads the Falcons with 11 tackles, Jonathan Babineaux has one sack and Deion Jones has one interception. The Falcons are allowing 309 yards and 20 points in the postseason.

The Packers and Falcons met in the Georgia Dome in late-October, a game Atlanta won by one point and needed a touchdown in the final 30 seconds to get the job done. That was the game that pretty much started the Packers downfall and had many questioning the future of the team. Well, now the Packers are the hottest team in the league and have a quarterback who is playing out of his mind. The Falcons have scored 33 or more points in five straight games and just torched one of the top defenses in Seattle. This is a game that's likely going to be a shootout and it could come down to which offense has the ball last. I don't have much confidence in either defense getting many stops.

Points usually come in handy in games like this, and I have more confidence in Rodgers finding a way to win than I do Ryan, who has just two career playoff victories. I had the Packers winning the Super Bowl heading into the playoffs and there's no reason to turn back now. I'm taking Green Bay and the points in a game that's likely going to go back and forth.