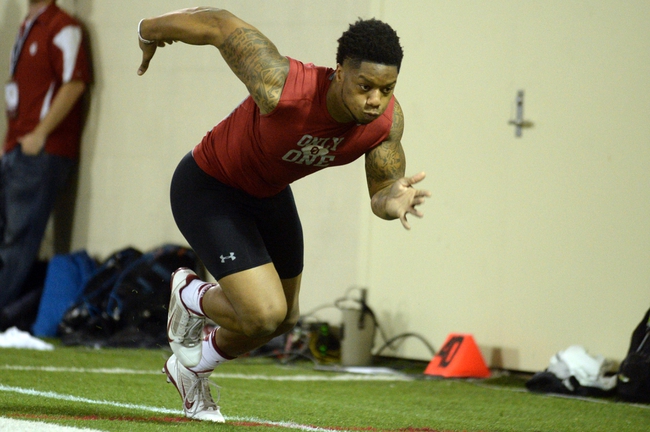 One of the big storylines in the 2017 NFL draft is where Joe Mixon will end up. After breaking a woman's face with one punch in a 2014 incident, nobody has a concrete answer and it’s a touchy subject for many. Some think Mixon shouldn’t have the right to play in the NFL while others believe in second chances and would welcome him with open arms.

I have no idea where Mixon should be drafted, but the team that should take a chance on him is the Philadelphia Eagles.

One, the Eagles were the team that picked up Michael Vick after a dogfighting scandal and some time in prison. After Vick gained stardom and a hundred million dollar contract, his off-the-field issue were widely more criticized, and it looked like he would never get a chance to play in the league again. The Eagles took a leap of faith, helped Vick repair his image and it paid off quite well with a couple of playoff appearances. The Eagles still have their fan base and over time the talk became more about football than dogs being tortured.

If the Eagles were willing to take Vick, I’m sure they’re one of the teams that would select Mixon as well.

As for the football side of things, the Eagles need a running back. Ryan Mathews likely isn’t coming back due to constant underachieving and injuries. Darren Sproles is still surprisingly a nice player, but he'll enter the season as a 34-year-old and isn’t a guy who can be a true No. 1 starter. Wendell Smallwood averaged 4.1 yards last season on limited touches, but he doesn’t scream difference maker at the position and is probably a change of pace back at this stage.

The Eagles have a second round pick they can use on Mixon, who is a first round talent and would be a steal football wise if he doesn’t go the first day.

Say what you want about Mixon, but the kid is a gifted football player who will make an offense better if given the chance. The Eagles clearly want to provide quarterback Carson Wentz with as much help as possible, and they started the process by adding wide receivers Alshon Jeffery and Torrey Smith. With a solid offensive line thrown in the mix, and the Philadelphia Eagles offense is cooking with gas. Just a quality running back away from being one of the top offenses in the league on paper.

We know Mixon will be drafted at one point and will play in the league despite some not liking that harsh reality. It’s just a question of where?

The pick in this article is the opinion of the writer, not a Sports Chat Place site consensus.
Previous Pick
Atlanta Falcons vs. New England Patriots - 2/5/17 Super Bowl 51 NFL Pick, Odds, and Prediction
Next Pick
NFL Draft 2017: Carolina Panthers Will Select Leonard Fournette