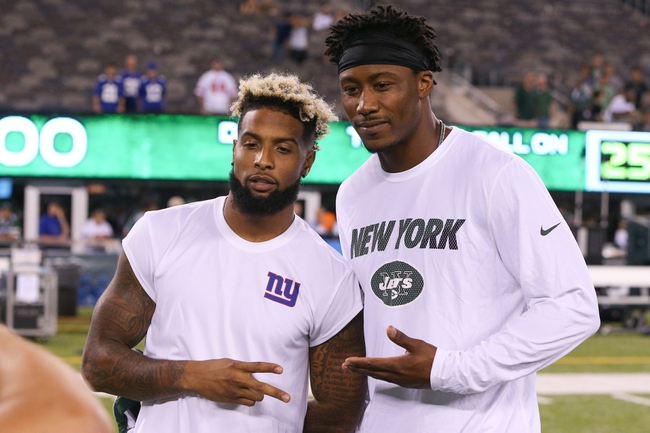 Brandon Marshall and Odell Beckham Jr. (New York Giants)- This duo will be supurb next season.  The Giants signed Marshall to a 2 year $11,000,000 contract this offseason to pair Marshall with Odell, who is fresh off a 101 reception, 1,367 receiving yards, and 10 touchdown season.  Now Brandon Marshall did not look like the Marshall two seasons ago this past season, but the New York Jets quarterback play was inconsistent all season.  With Eli throwing the passes, these two receivers paired with Sterling Shephard, will cause havic to make covering extremely difficult.

Mike Evans and DeSean Jackson (Tampa Bay Buccaneers)- The Buccaneers brought DeSean Jackson in on a 3 year, $35,000,000 deal, and now Tampa Bay has Evans and Jackson, both with a 1,000 receiving yards each this past season.  A perfect addition for this team, the speedy Jackson will compliment Mike Evans style of play perfectly.  For third year QB Jameis Winston, having these two wide receivers on the field at the same time will be tremendous for Winston.  These receivers have the potential to turn the Bucs offense into one of the best in NFL and with Winston improving and throwing, these receivers will play an important part in the Bucs hunt for their first playoff apearnance since 2008.

Demaryius Thomas and Emmanuel Sanders (Denver Broncos)- Demaryius and Emmanuel have been consistent for the last three season together as a duo, with both being Pro Bowlers last season, and both have showed that they can top 1,000 receiving yards each, even with a 7th round QB playing in his first season throwing to them this past season.  There are some challenges that this duo have, Demaryius has trouble catching catchable passes, Denver has a new head coach and offensive coordinator, but with these two receivers, they both will top 1,000 yards once more and Demaryius might snag 100 catches this season after getting comfortable with Siemian (Who I expect will be the starting QB).

Amari Cooper and Michael Crabtree (Oakland/Las Vegas Raiders)- MVP candidate Derek Carr will be back healthy and with these two talented receivers, both with over 80 catches each this past season, will cause terror for opposing secondaries as the Raiders hunt for their first playoff win since 2002.

Willie Snead and Michael Thomas (New Orleans Saints)- With both receivers being extremely young, both 24 years old, and having over 800 receiving yards each, Michael Thomas and Willie Snead will each get immense opportunities for receiving yards, touchdowns, and receptions, now that Brandin Cooks will not be on the field for the Saints next year, after being traded to the Patriots.  The only problem is that even though these receivers are extremely young and talented, Drew Brees isn’t getting any younger at 38, but with Drew still throwing for 5,208 yards last season this duo will be a top duo in the NFL this 2017-2018 NFL season.  Expect the Saints to draft a quarterback soon to pair with these receivers and prepare for the inevitable day when Drew retires.

Jordy Nelson and Randall Cobb or Davante Adams (Green Bay Packers)- With future Hall of Famer Aaron Rodgers throwing the ball their way, how are you not in the 5 best wide receiver duos in the NFL?  Well, with the addition of Martellus Bennett, it’s hard to call the Packers pass catchers a duo because with all those pass catchers, the ball will not go to a duo as often.  I expect the ball to get spread around, which should reflect in the stats for this duo.  Plus, the Packers don’t really have a true duo, but they do have one of the best trios of wide receivers in the NFL.  It's too hard to judge who the duo is until the end of the season, the end of the season stats and impact will judge who is the main Packer duo and if the Packers should have been in the top 5.