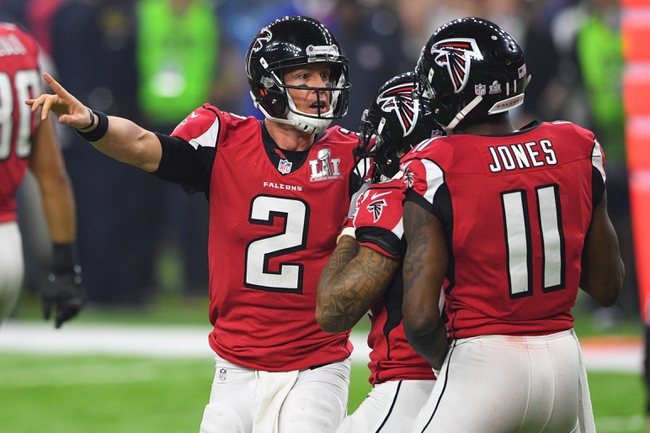 It's going to be an interesting year for the Atlanta Falcons after coming off a Super Bowl they should have won and changing their offensive and defensive coordinators. Will the collapse in the big game motivate the team to complete unfinished business or will it prove to be too much to overcome and result in your typical NFC South division flip? This is certainly a team to keep an eye on this season.

Anything is possible for the 2017 Falcons.

Key Player Losses: While the coaching staff changed, the Falcons did a great job of keeping their team together and not losing any notable names. Wide receiver Aldrick Robinson left for San Francisco after one season in Atlanta in which he caught 20 passes for two touchdowns. Roddy White retired after not playing last season and watching his production drop over the years. Defensively, Philip Wheeler and Sean Weatherspoon are free agents. Again, nothing to see here.

Key Player Additions: The Falcons made a nice little splash by adding defensive tackle Dontari Poe, who is a two-time Pro Bowl selection and considered one of the better interior defensive linemen when healthy. Injuries are the main question with the 26-year-old Poe. Atlanta also added speedy wide receiver and return specialist Andre Roberts, who has more than 2,800 receiving yards and 14 touchdowns while also racking up more than 2,000 return yards. These two signings will make an already good Falcons team that much better, as they're both solid players at their respective positions.

Draft: Takkarist McKinley is a speed pass rusher who will look nice on the opposite side of Vic Beasley and is somebody who can contribute right away. Linebacker Duke Riley is a reliable tackler who has great athleticism and covers a lot of ground. Sean Harlow is a versatile offensive lineman who has experience at all five positions and Damontae Kazee is a physical cornerback who will be tough in run support. Not a deep draft for the Falcons, but they got a day one contributor in McKinley and some nice value picks who could pay off down the road.

Outlook: The Atlanta Falcons are pretty much the same team as they were last season, so if you were on the bandwagon already, there's no reason to jump off now. The offense is as good as it gets and the defense is athletic and has the ability to improve greatly under Dan Quinn. The concern that I have is the Super Bowl hangover. The Falcons should have won that game and falling apart the way they did can affect the players on this team. Just look at the Seattle Seahawks. They haven't been the same since calling that passing play and blowing the game against the Patriots. Marshawn Lynch quit and Richard Sherman has been in trade rumors nearly every offseason. The talent is there, but there's a black cloud that may or may not go away. Still, in terms of value, these Super Bowl odds are quite nice given the talent on this roster and what they showed a season ago.