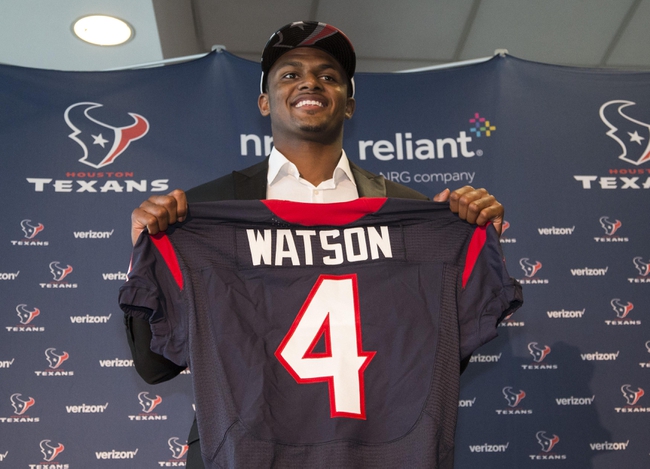 The Houston Texans have finished 9-7 in each of the first three seasons under coach Bill O’Brien, and the franchise seemed to turn heads last year more the previous two. The Texans ad the best defense in the league last season and that was without J.J. Watt, and the offense showed flashes of promise if it could just get production out of the quarterback position. There's a lot to work with in Houston right now and the expectations are quietly increasing.

Could the Houston Texans be the breakout team in the 2017-18 NFL season?

Key Player Losses: The Texans lose their starting quarterback Brock Osweiler, but it's certainly addition by subtraction considering he's not a good quarterback and had an insane contract. The Texans future is unquestionably a lot brighter with Osweiler now in Cleveland. Defensively, the Texans lose one of their top tacklers in cornerback A.J. Bouye, a decent linebacker in John Simon and a veteran safety who had six interceptions last season in Quintin Demps. The defense takes a minor hit in depth, but the loss of Osweiler makes everything worth it if you’re a Houston Texan fan.

Key Player Additions: None. The Texans have had possibly the quietest offseason of any team through free agency.

Draft: I thought Deshaun Watson was the best quarterback in the draft due to his work ethic, athleticism and gamer mentality. Watson has a great chance to be the starting QB for the Texans Week 1 and is the future for this franchise. Zach Cunningham is a rangy, athletic linebacker who goes to a defense that's already one of the best in the league, making this a terrific fit for the Vanderbilt second rounder. Running back D'Onta Foreman probably would have gone higher if it weren't for injury concerns, but he's a solid backup and will lighten the load for Lamar Miller. Julie'n Davenport is a massive offensive tackle at 6’7” and should make the team as a backup with high upside. Defensive tackle Carlos Watkins is a football players football player, as there's just a toughness about him that you love as a fan or teammate. Overall, I love the Texans draft due to them getting their QB and a handful of other players who will contribute right way on both sides of the ball.

Overall: If you’re looking for a reasonable middle of the road Super Bowl darkhorse, the Texans may be the team for you. The Texans had arguably the best defense in the league without Watt on the field. He's back now and should take that unit to a completely different level. The offense has talent at nearly every position besides quarterback. If Watson wins the job and can channel his inner Dak Prescott, the Texans have a legit chance to win double-digit games for the first time since 2012 and make a playoff run. For god's sake, Houston won nine games and made the second round of the playoffs with Osweiler at quarterback. There's a lot to like with this Texans team and we’re talking legit Super Bowl contender if Watson can win the job from Tom Savage and make an immediate impact as a rookie.