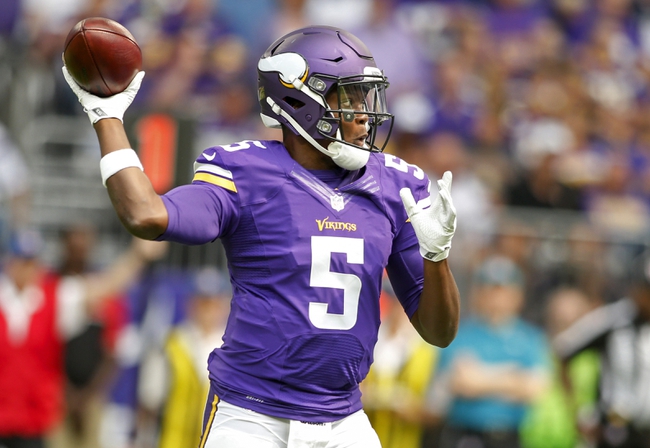 The Minnesota Vikings hope to make the playoffs for the second time in three years and rebound from a frustrating 8-8 season. A lot of the Vikings hopes and dreams depend on the health of quarterback Teddy Bridgewater, who is still recovering from a torn ACL and many are optimistic about him being ready for the start of the upcoming season.

It's a question mark season for the Vikings who could either surprise or fall on their face if things don't bounce their way.

Key Player Losses: While he is 32 years old, the Vikings say goodbye to an era when running back Adrian Peterson left for New Orleans. Peterson is a seven-time Pro Bowler, a sure Hall of Famer and holds numerous Vikings records as well as NFL records. Defensively, linebacker Chad Greenway retires after 11 seasons with the Vikings and cornerback Captain Munnerlyn returns to the Carolina Panthers after four interceptions in three seasons in Minnesota. Four-time Pro Bowl offensive lineman Jake Long announced his retirement.

Key Player Additions: The Vikings replaced Peterson with the addition of Latavius Murray, who had 2,200 rushing yards and 20 touchdowns in three seasons with the Oakland Riders. Murray has proven the last two years he's more than capable of carrying an offense. Offensive tackle Mike Remmers has bounced all over the league but does have 37 starts under his belt at 28 years old. The Vikings took a flyer on wide receiver Michael Floyd, who has 3,700 receiving yards and as a lot of talent, but he had a subpar season that included a DUI arrest. Minnesota also added punter Ryan Quigley, who is averaging 44.6 yards for his career and should do a nice job of replacing Jeff Locke.

Draft: Dalvin Cook was arguably the most talented running back in the draft, as his speed and playmaking is elite stats. Only issues with Cook are his durability and ball security. Pat Elflein was possibly the best center in the draft and has a legit chance to win a starting spot on the Vikings offensive line as a rookie. Jaleel Johnson is an athletic defensive tackle who does a good job of clogging running lanes. Linebacker Ben Gedeon has great instincts and a high football IQ, and he could contribute as a backup this season. Wide receiver Rodney Adams is a big play wide receiver who can also make plays on special teams, while tight end Bucky Hodges is a massive target at 6’6” and can stretch the field a bit. The Vikings snagged a lot of impact players for a team that didn't have a first round pick. You have to love this draft if you're a Minnesota fan.

Outlook: It’s hard to have a feel on the Vikings when nobody knows if Bridgewater is going to be ready to play or not. We just saw a full season of Sam Bradford and it didn't end well, as he's a checkdown king and not the difference maker this offense needs. A healthy Bridgewater makes the Vikings a sleeper Super Bowl contender, no Bridgewater makes the Vikings an average team with a great defense but an offense that can be controlled. The Vikings have one of the top defenses in the league and an offense with great weapons that includes improved running back depth. Putting money on the Vikings in terms of future bets all comes down to the health of Bridgewater, which right now is a giant question mark.