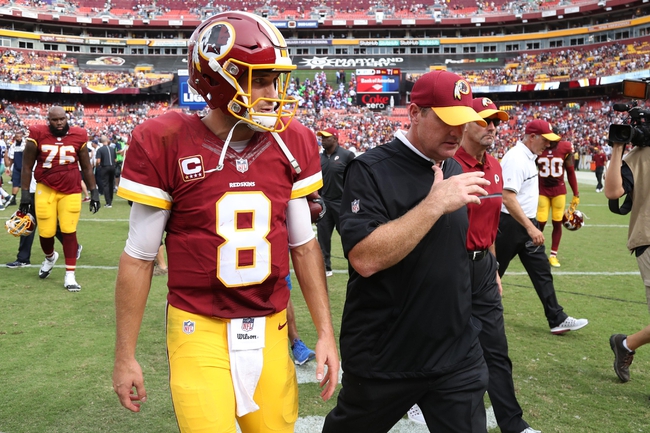 The Washington Redskins have not won double-digit games since 2012 and are 21-26-1 in three seasons under coach Jay Gruden. While the Washington Capitals and Washington Nationals have had their fair share of success, the lack of winning the Redskins have done is driving the locals nuts. Washington loves its football, and the fans haven't seen a playoff win since the 2005 season. After giving Gruden an extension, you better believe this fanbase wants to see some progress.

Do the Redskins have what it takes to be the surprise team in the NFL this year?

Key Player Losses: The Redskins lost their top two receivers from last year in Pierre Garcon and DeSean Jackson, a duo that combined for more than 2,000 yards and seven touchdowns. Losing those guys doesn't do Kirk Cousins any favors, especially when trying to decide if he's a franchise quarterback or not. Defensively, veteran defensive back Donte Whitner is currently a free agent. The same can be said for strong safety Duke Ihenacho. Defensive end Chris Baker is now in Green Bay after five seasons in Washington in which he produced 182 tackles and 11.5 sacks.

Key Player Additions: The Redskins tried to replace some of their receiving losses by adding Terrelle Pryor, who is fresh off a 1,000-yard season and has versatility with his ability to run and throw the football. Receiver Brian Quick is also coming off his best season yet in which he hauled in 41 passes for 564 yards and three touchdowns. The Redskins defense gets a boost with the addition of Pro Bowl linebacker Zach Brown, who is fresh off his best season that includes 149 tackles and four sacks. Washington also added free safety DJ Swearinger, who has 229 tackles and 19 pass deflections for his career.

Draft: Jonathan Allen is a talented defensive lineman who can rush the passer but is also a guy who clogs running lanes. Allen is somebody who can anchor a defensive line for many years to come. The Redskins added another Alabama defender in linebacker Ryan Anderson, who is a playmaker and simply has good instincts on the football field. Fabian Moreau is a big cornerback at 6’1”, gets physical at the line of scrimmage and doesn't mind helping out in run support. Samaje Perine is an old school running back who runs north and south and is also respectable in pass protection. Montae Nicholson is a speedy safety who covers tons of ground and can play up in the box if needed. Jeremy Sprinkle could be the steal for Washington, as he’s a 6’5” tight end, while Chase Roullier is a versatile offensive lineman who adds depth to the OL unit.

Outlook: The Washington Redskins were already arguably the worst team in the NFC East on paper, and they lost some of their top performers on offense. Not sure how you expect to get a proper read on Cousins when his top two targets leave for other teams. The Dallas Cowboys were already head and shoulders better than the Redskins, and the New York Giants and Philadelphia Eagles added key pieces to improve their tem this offseason. Washington has a respectable defense, and you can win with Cousins, but I don’t think this team is talented enough overall to hang in a loaded division. I wouldn't touch these Super Bowl odds, and I don’t have the Redskins making the playoffs this season. There’s just too many questions with this franchise.