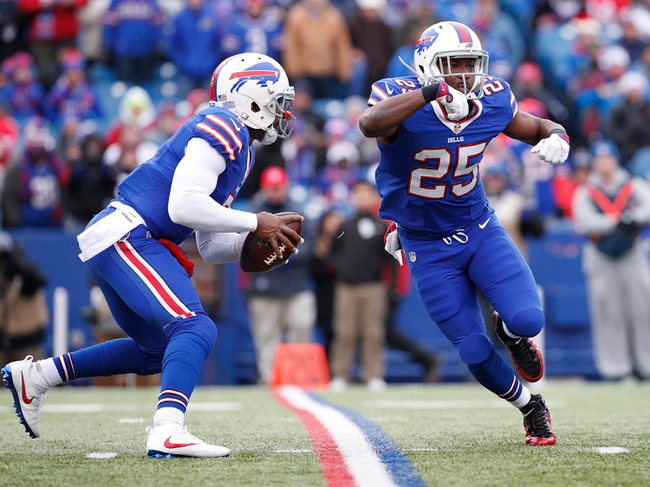 The Buffalo Bills have not made the postseason since 1999 and are coming off a seven-win season. The franchise is hoping another head coaching change in Sean McDermott will be the answer to their prayers, as this loyal fan base has struggled for nearly two decades. Of course, with this roster, the Bills have to expect baby steps before having any real expectations.

Will the Bills finish at least with a .500 record this season? That would certainly be a move in the right direction.

Key Player Losses: The Buffalo Bills will have a lot of different faces on offense, as backup running back Mike Gillislee is now with the New England Patriots. The Bills also lost a trio of wide receivers with Robert Woods, Marquise Goodwin and Justin Hunter all having different addresses, which means over 1,200 receiving yards and eight touchdowns from a year ago isn't on this roster. Defensively, leading tackler Zach Brown is now a linebacker for the Washington Redskins while top cornerback Stephon Gilmore callas the Patriots home. Other corner Nickell Robey-Coleman is now with the Los Angeles Rams. Players such as Leger Douzable, Corey Graham and Corey White are still free agents. Kicker Dan Carpenter is also a free agent after making 19 of 25 field goal attempts last season.

Key Player Additions: Buffalo tried to replace some of their lost wide receiver production by adding Corey Brown. Brown, who spent his first three seasons with the Carolina Panthers, has 79 receptions and seven touchdowns for his career. WR Andre Holmes has 102 career receptions and 11 touchdowns in his last three seasons. Defensively, the Bills add strong safety Micah Hyde, who has over 400 career tackles and 24 pass deflections. The Bills also added kicker Steven Hauschka, a veteran who comes over from Seattle and has made 191 of 219 field goal attempts.

Draft: Tre'Davious White is an explosive cornerback who will play a ton this season after Buffalo lost some key secondary depth and needs the defense to lead the way this season. The Bills needed wide receiver help around Sammy Watkins, and Zay Jones has the ability to become the No. 2 option in a struggling offense. Dion Dawkins is a big offensive guard who can also play tackle, and he’ll be a legit starter before you know it. Matt Milano is a physical linebacker who plays hard and Buffalo will like his lunchpail attitude. Nathan Peterman is a decent project at quarterback due to his instincts and athleticism, while Tanner Vallejo is a linebacker who could make a move to the defensive backfield or contribute on special teams.

Outlook: It’s hard making a case for the Bills when it comes to the playoffs, as I’ve never been high on Tyrod Taylor as a quarterback and he's fresh off a season in which he completed under 62 percent of his passes. The Bills top two offensive players in Sammy Watkins and LeSean McCoy are injury prone and there's not much depth behind them. The Bills defense plays hard, but they lost their best cornerback and leading tackler from a year ago and didn't make many big moves during free agency to improve the unit. I see this being another middle of the road season for the Buffalo Bills. Then again, it's what we've expected from this franchise for the last 15-plus years.