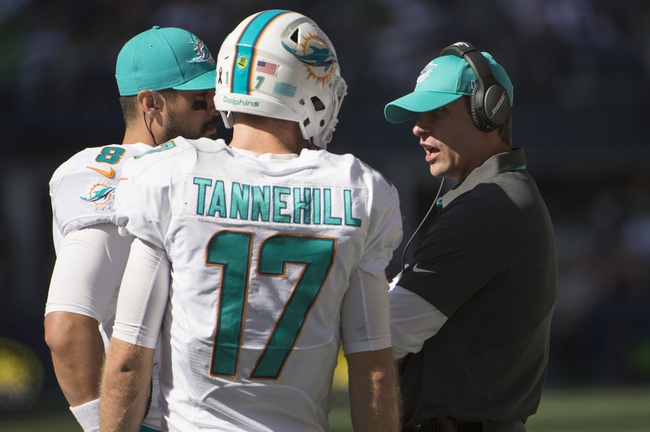 The Miami Dolphins won 10 games last season and made the playoffs in the first year under Adam Gase, so there's real reason for optimism in Sunny South Florida. However, the Dolphins have not made the playoffs in back-to-back seasons since 2000-01, so sustaining that success will be key for this young head coach. With nearly the same team but a much tougher schedule than a year ago , this will be the show and prove year for these Dolphins.

Will the Miami Dolphins push for another playoff spot and become a team to watch in the AFC this season?

Key Player Losses: Tight end Dion Sims leaves for the Chicago Bears after four seasons in Miami that included 74 receptions, 699 yards and eight touchdowns. Two-time Pro Bowl offensive tackle Branden Albert is now in Jacksonville after three up-and-down seasons with the Dolphins. There were some minor losses on the defensive side with linebacker Jelani Jenkins leaving for the Oakland Raiders and safety Isa Abdul-Quddus possibly being forced to retire due to a neck injury. Veteran defensive end Mario Williams was released due to underperforming and Dion Jordan was cut after being ruled a bust out of Oregon.

Key Player Additions: The Dolphins added a playmaker in tight end Julius Thomas, who is a two-time Pro Bowler and has 33 touchdown receptions in his last four seasons. With improved quarterback play, Thomas has a chance to return to the player he was for the Denver Broncos. Defensively, Miami added a pass rusher in William Hayes, who has 33.5 sacks and seven forced fumbles for his career, and veteran safety Nate Allen, who has 13 career interceptions.

Draft: Charles Harris is a speed pass rusher who should be thrown into the toration immediately due to an aging Cameron Wake, and he should add explosive plays to the defense. Raekwon McMillan fills a huge hole at linebacker and has the ability to possibly start right away due to the middle of the defense being a huge weakness for the Dolphins. Cordrea Tankersley is a playmaking cornerback who could become a consistent pro if he becomes less grabby. Isaac Asiata is a physical guard who brings versatility to Miami’s offensive line. Vincent Taylor and Davon Godchaux could be a pair of steals at defensive tackle if they make the team and Isaiah Ford is an explosive receiver who proved to be sure handed at Virginia Tech.

Outlook: There’s a lot to like with the Dolphins, as Ryan Tannehill is coming off his best season yet and has another offseason to work with a quarterback guru such as Gase. The backfield found a star in Jay Ajayi and the receiving core is talented with Jarvis Landry, DeVante Parker, Kenny Stills and now Thomas. There's no reason why this Dolphins team can’t be one of the better offensive teams in the AFC this season with all of these weapons. The problem is Miami’s defense was trash last year, finishing 29th in total yards allowed and 18th in points per game allowed. Even with Ndamukong Suh on the defensive line, the Phins couldn't stop the run to save their lives. I think the Dolphins offense is good enough to keep them in playoff contention, but unless that defense makes drastic improvements, Miami will have a ceiling on just how far it can go.