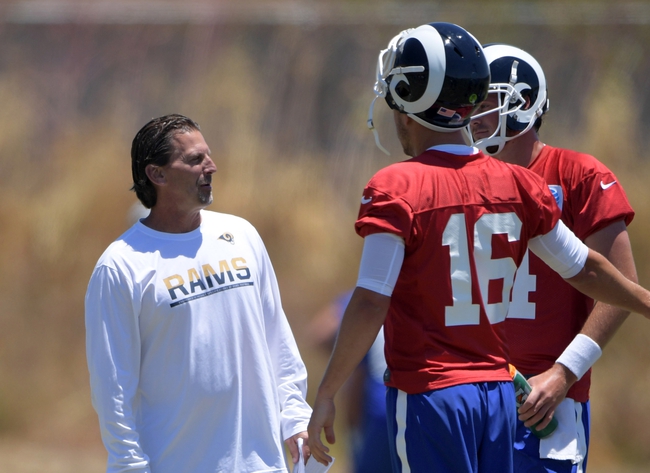 The Los Angeles Rams didn’t make a good first impression on LA, winning just four games and being forced to make a chance at head coach. Sean McVay will now lead the Rams after a couple of seasons as the Washington Redskins offensive coordinator. After an offense that was dead last in points and yards, the Rams can use all the help they can get. It's really all uphill from here considering things couldn't have been much worse than last season. This is also a franchise that hasn't made the playoffs since the 2004 season.

Can the Rams speed up the process with a breakthrough season of six or seven victories?

Key Player Losses: The Rams lose their leading passes from a year ago with Case Keenum leaving for the Minnesota Vikings. The Rams wide receiving corps will also look different with Kenny Britt, Brian Quick and Lance Kendricks all finding different teams to play for in the 2017 season. Safety T.J. McDonald and defensive end William Hayes both leave for the Miami Dolphins.

Key Player Additions: The Rams made some big changes on offense by bringing in talented wide receiver Robert Woods, who caught 203 passes for over 2,400 yards with the Buffalo Bills and is a fan favorite considering he played for USC and is from Cali. LA also added a pair of offensive linemen in Andrew Whitworth and John Sullivan, a duo that has a combined 258 starts, and Whitworth is a three-time Pro Bowler. Defensively, the Rams added former USC cornerback Nickell Robey-Coleman, who has 167 career tackles and 28 pass deflections to his name. Linebacker Connor Barwin is also a terrific pass rusher that adds a spark to a defense that was 26th in the league last year with 31 sacks.

Draft: Gerald Everett is a tight end with high upside given the fact he started playing football a few years ago, and he has great hands and athleticism. Cooper Kupp is a reliable receiver who can become a security blanket within a Rams offense that needs improvement. John Johnson is a playmaking safety who could become a legit starter if he adds strength and bulk to his upper body. Josh Reynolds is a quick wide receiver and has size at 6’3”, adding even more depth and options to an offense needing direction. Linebacker Samson Ebukam is a speedy player who could develop into a good pass rusher. Tanzel Smart is a small defensive tackle, but he's quick off the snap and plays the game hard. Sam Rogers is a versatile fullback who can be used in creative ways, while linebacker Ejuan Price is a decent backup if he can just stay healthy.

Outlook: The Los Angeles Rams have some building blocks to be excited about, as the defense is talented and was ninth in yards allowed last season, and Todd Gurley has proven to be to be of the best running backs in the league. The offensive line should be improved and Woods is a nice option to go along with Tavon Austin. The bad news is that quarterback Jared Goff had very few positive plays last season, there's a new head coach and the Rams still play in the NFC West with the Seattle Seahawks and Arizona Cardinals. Unless Goff makes ridiculous strides from a year ago, it's hard seeing the Rams come close to a .500 record this season. We’re talking about an offense that was last in yards and points. I like some of the players on this team and there's potential, but the Rams have to wait a couple of years to have bigger goals, as the QB play is not even close to being up to par.