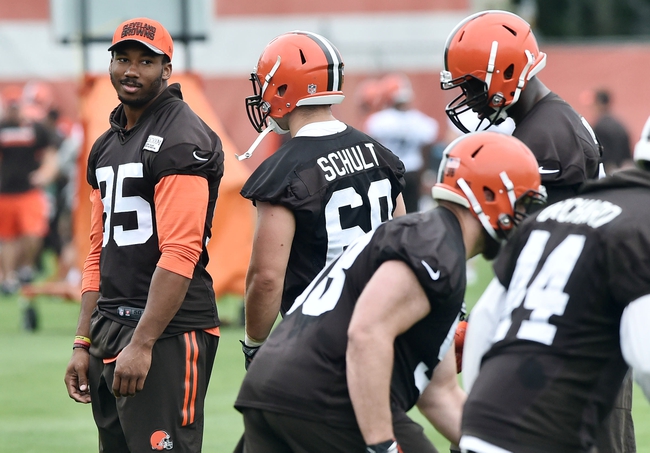 The Cleveland Browns won just one game in the first year under Hue Jackson and have won a combined four games the last two seasons. The Browns have not made the playoffs since the 2002 season and haven't won a playoff game since 1994. With the Indians and Cavaliers finding recent success, the city would love anything positive to come out of its football team so it can stop being the butt of the jokes throughout the league. The O/U win total for the Browns is 4.5, and there will be a party in Cleveland if that's topped this season.

Will this be the season the Browns show some sign of life?

Key Player Losses: The Browns watch veteran quarterback Josh McCown leave for the New York Jets, and they give up on the Robert Griffin III experiment. Playmaker Terrelle Pryor leaves for the Washington Redskins after often being the one guy on this Browns offense that can move the ball, while tight end Gary Barnidge is a free agent and wide receiver Andrew Hawkins is now in New England. The only loss that really hurts is losing Pryor considering he was a 1,000-yard receiver and showed flashes of being unstoppable due to his athleticism and big frame.

Key Player Additions: The Browns add wide receiver Kenny Britt, who has had his moments throughout his career and brings more than 300 receptions and almost 5,000 career receiving yards to this offense. Offensive linemen JC Tretter and Kevin Zeitler have combined for 81 starts and both come from winning teams (Packers and Bengals), which should help change the culture a little bit.

Draft: Myles Garrett is a game changer along the defensive line and somebody who will make the defense instantly better due to his ability to demand double teams and get to the quarterback. Jabrill Peppers is a versatile defender who can play many positions and has a nose for the football and big plays. Tight end David Njoku is a terrific athlete who can make plays after the catch. Quarterback DeShone Kizer could have been a first round pick, and he’ll have a chance to snap the Browns bad luck with QB’s in due time. Defensive tackle Larry Ogunjobi is great against the run and should help improve a Browns D that struggled a year ago. Howard Wilson is a physical cornerback who will help in run support. Roderick Johnson is a long offensive tackle at 6’7” with long arms, making him an intriguing fifth round pick. Caleb Brantley is a quick defensive tackle who would have gone higher if it weren't for off-the-field issues and questions about his passion for the game. Kicker Zane Gonzalez is a college football record holder and Matthew Dayes is a quick running back with above-average hands.

Outlook: I love the Browns draft, as they landed three guys in Garrett, Peppers and Njoku who can be starters the first week of the season and contribute at a high level. Thats a huge step in the right direction and can speed up the rebuilding process of this franchise. A full season of Jamie Collins will also help a Cleveland defense that was 30th in points allowed and 31st in yards allowed. There are positives with this football team, as the young talent is there and provides glimmers of hope for the future. The bad news is Cody Kessler, Kevin Hogan, Brock Osweiler and Kizer is the current quarterback situation. Of course, Kizer is the future, but those other three guys don't provide much hope for the now. Like I said before, if the Browns win five games, this season would be considered a success heading into 2018-19.