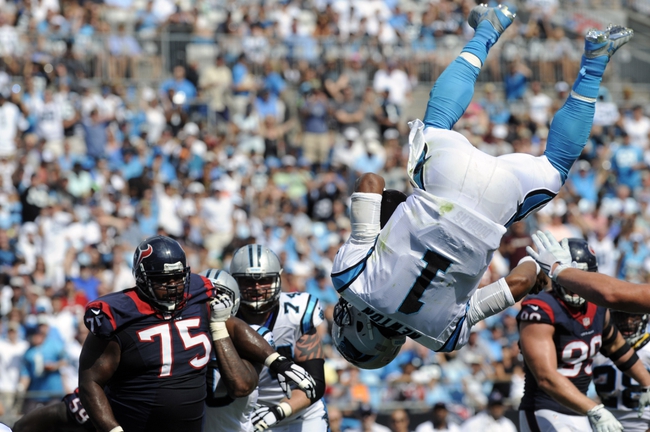 Out at Bank of America Stadium in Charlotte on Wednesday, August 9, the Houston Texans will visit the Carolina Panthers in NFL Week 1 preseason action.

The Texans are looking to build off a fairly successful season in 2016, where they finished 9-7 and won the AFC South division. Houston beat the Raiders in the Wild Card game, but lost in the Divisional Round to the eventual champion Patriots.

It’s looking like QB Tom Savage will be leading the Texans on offense in 2017, but Houston could also turn to rookie arm Deshaun Watson, who was a first-round draft pick this year. Will Fuller and DeAndre Hopkins are the team’s top receivers, while Lamar Miller will handle RB duties along with Alfred Blue.

Over on the Carolina side, they’re in a bit of a different situation thanks to a disappointing 6-10 finish in 2016 that saw them finish fourth in the NFC South. The Panthers were the first team in NFL history to go 15-1 and miss the playoffs the next year.

Head coach Ron Rivera will have to add a few new pieces to his roster. The Panthers’ big offseason signing was ex-Viking OT Matt Kalil, and the team shored up their secondary with the signing of CB Captain Munnerlyn, also from the Vikings.

Cam Newton will once again helm the offense for Carolina in 2017, and he’s got a few reliable receiving threats in Kelvin Benjamin, Devin Funchess and TE Greg Olsen. Johnathan Stewart continues as a solid backfield presence, along with Christian McCaffrey and Fozzy Whittaker.

Injury-wise, both teams have a few guys to keep an eye on. Carolina has a host of Questionable designations, including WR Stephen Hill, LB Luke Kuechly, QB Cam Newton and T Michael Oher. As for the Texans, WR Will Fuller will be out (collarbone), and T Derek Newton is on the PUP list currently.

This should be a pretty interesting matchup, but we should obviously not expect to see the first-stringers for more than a series or two. As far as depth, both teams have quite a bit to prove in their receiving corps, but this one is probably going to come down to backup QBs. The Panthers’ Derek Anderson isn’t exactly the Cadillac of quarterbacks, but he’s got more in-game experience than Savage or Watson, and that should serve him well here. I’m going with the Panthers in an entertaining game.