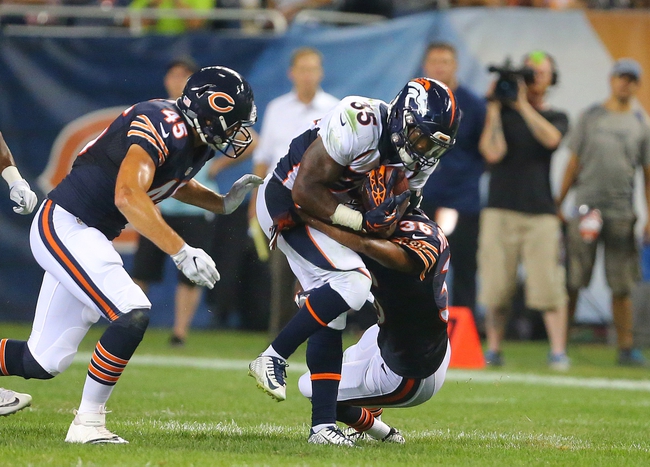 Up at Soldier Field on Thursday, the Denver Broncos and the Chicago Bears will be kicking off their NFL preseasons.

The Broncos are fresh off a 2016 that saw them finish 9-7—third in the AFC West—and fail to make the playoffs after a Super Bowl 50 win. Head coach Gary Kubiak retired at the end of the year due to health concerns, handing the reins to Vance Joseph.

Denver went through a few notable departures in the offseason in addition to Kubiak. RB Justin Forsett retired, while the team notably lost OT Russell Okung and NT Sylvester Williams to free agency. There will be a few new faces on the Broncos’ roster this year as well. RB Jamaal Charles signed this off-season, as did G Ronald Leary and OT Menelik Watson.

QB Trevor Siemian will be helming the offense this year, flanked by big-time WRs Demaryius Thomas and Emmanuel Sanders, as well as RB CJ Anderson.

Over on the Bears’ side, they finished 2016 at a dismal 3-13, destroyed by injuries (an NFL-high 19 players on IR at the end of the year) and going 0-8 on the road for the first time in franchise history.

With QB Jay Cutler retiring, third-year head coach John Fox will be looking to Mitch Trubisky to help guide the team into the future. Trubisky was picked by Chicago at second overall in the draft this year. He’ll join a different-looking Bears team that lost QB Matt Barkley, QB Brian Hoyer and WR Alshon Jeffery in free agency this year.

At least initially, QB Mike Glennon will be helming the Bears’ attack while Jordan Howard and Jeremy Langford handle RB duties. Kevin White will look to take a step forward this year as the team’s top WR, while Zach Miller slots in at TE.

Denver has at least a couple of injury concerns going on right now, most notably RB Devontae Booker and LB Shane Ray; both are out with wrist issues. As for the Bears, Markus Wheaton will be out of action and Jeremy Langford has been beat up in practice lately.

Both these teams are retooling after disappointing seasons in 2016, but the talent level here is definitely in favor of the Broncos. Chicago is thin in several spots, and the depth Denver has should serve them well here. Give me the Broncos.