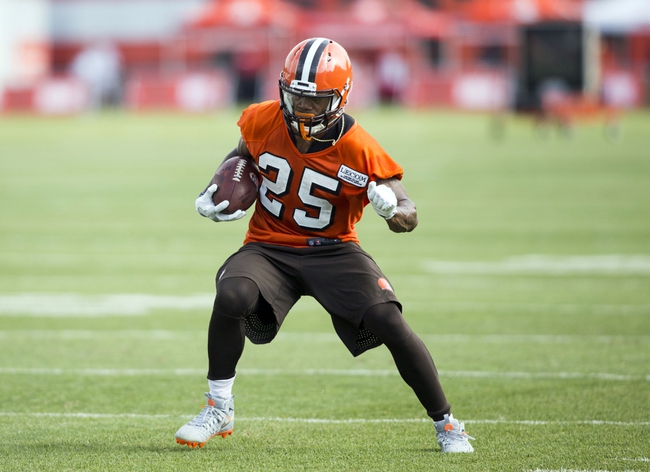 The New Orleans Saints and the Cleveland Browns kick off their respective 2017 schedules, meeting in week 1 NFL preseason action.

The New Orleans Saints will look to improve this year after finishing 7-9 for the second straight season, while missing the playoffs for the third year in a row. Drew Brees will return as the incumbent starting quarterback, however it could be argued that the Saints made one of the biggest moves of the offseason, signing former MVP and all-pro running back Adrian Peterson to a two year, $7 million contract, taking the chance on the 32-year old. Also 32 and signing with the Saints this season, wide receiver Ted Ginn Jr. will look to make an impact on the already threatening Saints wide receiving core. New Orleans lost a large chunk of their secondary from last season, parting ways with Jairus Byrd, Roman Harper and Kyle Wilson, but made up for it in the draft by selecting highly-touted cornerback Marshon Lattimore 11th overall out of Ohio State. The Saints will hope that Lattimore can improve a defense that gave up the most passing yards in the league last season, allowing a whopping 4.380 yards, or an average of 273.8 passing yards per game. The Saints also boasted however, the most productive offense last season, putting up 6.816 total yards, most in the NFL, including 5,074 yards through the air. The spotlight will be on Ryan Nassib and Chase Daniel to see who will back up Brees this season under center should the 38-year old Brees end up on the sidelines.

The Cleveland Browns will look to bounce back from a franchise and league worst 1-15 mark last season that saw the Browns miss the playoffs for the 14th straight year. In that attempt to rebound, the Browns have undergone what some would call a facelift in the offseason, starting with a new defensive co-ordinator in Gregg Williams, whose first order of business is to build a defensive core around 2017 1st overall pick Myles Garrett out of Texas A&M. Garrett recorded a total of 31 sacks and 47 tackles for loss in his three seasons with the Aggies and will hope that translates into success at the professional level for his new squad. Cleveland had one of the more productive opening two rounds of the draft, also selecting safety Jabrill Peppers out of Michigan and quarterback DeShone Kizer out of Notre Dame. There could be an interesting position battle brewing for the starting QB spot as Kizer isn’t the only newly-acquired pivot for Cleveland this season, as the Browns acquired Brock Osweiler via a trade with the Texans. The Browns made room for the pair by saying goodbye to Robert Griffin III and Josh McCown who signed with the Jets. The Browns also made a splash in their receiving core, signing Kenny Britt and Terrelle Pryor while getting rid of oft-troubled Andrew Hawkins. The Browns weren’t doing themselves any favours last season, and will hope to improve on an offense that finished third last in total offense with 4,976 total yards, or 311 per game while trying to shore up a defense that finished second last in total yards against, giving up 6,279 total yards last season, or an average of 392.4 per game.

Something has to give here, as the Saints haven’t won a preseason game since 2014, while the Browns have only won one preseason game in the last two years. However, I think there are more position battles and question marks going on over on Cleveland’s side, which should result in more competition and a better performance from the Browns so I’ll take Cleveland here in a pick ‘em.