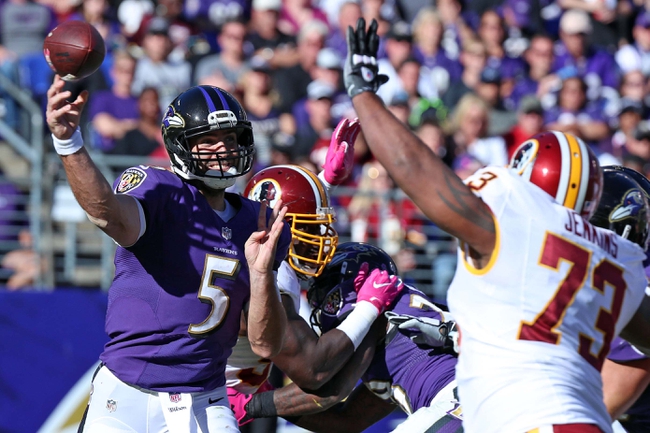 M&T Bank Stadium in Baltimore will be hosting Week 1 preseason NFL action on Thursday as the Washington Redskins visit the Baltimore Ravens.

The Redskins are coming off an 8-7-1 record in 2016, finishing third in a pretty talented NFC East. Washington missed the playoffs, but did tally back-to-back winning seasons for the first time since 1996-97.

Head coach Jay Gruden returns to the Redskins for his fourth year, and he’ll see some turnover in the front office as well as on the field. Washington added DTs Stacy McGee and Terrell McClain as well as SS DJ Swearinger and WR Terrell Pryor in free agency, while WRs DeSean Jackson and Pierre Garcon bolted in free agency along with DEs Chris Baker and Ricky Jean-Francois.

Kirk Cousins will retain the reins of the offense, tossing to Pryor, Josh Doctson and Jamison Crowder as his top WR targets. RB duties will go to Rob Kelley and Chris Thompson for the Redskins this year.

Over on the Ravens’ side, they finished at 8-8 in 2016, good enough for second place in the AFC North. Baltimore improved on their 5-11 record from the previous year but missed the postseason in consecutive years for the first time since 2004-05.

Ravens QB Joe Flacco has a few options on offense this year. Along with Maclin, Flacco will be tossing to Mike Wallace, Breshad Permian and Chris Moore while Lorenzo Taliaferro and Terrance West slot in beside Woodhead on the RB depth chart.

Both teams have some injury concerns heading into the preseason. Notable Ravens questionable designations include Joe Flacco, Breshad Perriman, Tony Jefferson and Kendrick Lewis. As for the Redskins, DeAngelo Hall and Jordan Reed will be gone, while Jamison Crowder, Vernon Davis, DeAngelo Hall and Donte Whitner are questionable.

Glancing at the depth charts for both teams, neither seems to have much depth right now at the key positions. The Redskins have Colt McCoy and Nate Sudfeld behind Cousins, while Baltimore will be relying heavily on Ryan Mallett here. All things considered, though, I think Baltimore can get some quality field time from West, Woodhead and Perriman, which should help put the Ravens in position for a win. Give me Baltimore for the cover.