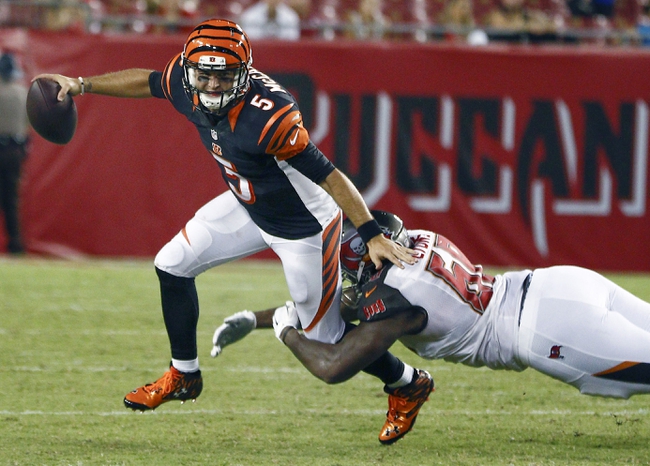 Over at Paul Brown Stadium on Friday, August 11, the Tampa Bay Buccaneers and the Cincinnati Bengals will be kicking off their NFL preseasons.

The Bengals are coming off an improved season in 2016, finishing 9-7 for second place in the NFC South. Late-season losses to the Cowboys and Saints stalled Tampa’s playoff hopes, however, and the Bucs would miss the postseason for the ninth straight year.

Heading into 2017, Tampa Bay will once again be under the guide of head coach Dirk Koetter, who returns for a second year. Koetter will preside over some new names this year, as Tampa Bay was active in free agency right away with the signings of WR DeSean Jackson, DT Chris Baker, S JJ Wilcox and K Nick Folk. Notable departures from the team this offseason include QB Mike Glennon, WR Cecil Shorts and WR Vincent Jackson.

Young QB Jameis Winston will once again be helming the Buccaneers offense in 2017. Winston’s big WR targets are Jackson and Mike Evans, while Doug Martin and Jacquizz Rodgers will be handling running back duties.

As for the Bengals, they took a step backward in 2016, finishing a limp 6-9-1 which left them in third place in the AFC North. The paltry record would cause Cincinnati to miss the playoffs for the first time since 2010.

Head coach Marvin Lewis will be a familiar face on the sideline this year, as he’s coming back for his 15th year. The Bengals made a few changes to their roster over the spring, signing LB Kevin Minter, OT Andre Smith and RB Cedric Peerman. Leaving the team were LB Rey Maualuga and K Zach Hocker (released), while G Kevin Zeitler, LT Andrew Whitworth and DL Dogmata Peko are also gone (free agency).

Both teams have some injury concerns heading into this one. Don’t expect to see the Buccaneers’ Caylin Hauptmann (out), Cecil Shorts (doubtful) or Jacquies Smith (PUP list). Vincent Jackson is also questionable. As for the Bengals, they’re a little healthier but still have a few Questionable designations including Clint Boling, Chris Brown, Jake Kumerow and John Ross.

This is a matchup between two teams heading in opposite directions this year. Tampa is looking for a playoff berth, while the Bengals’ postseason window seems to have closed. That said, in a preseason battle of second- and third-stringers, Tampa has a solid QB presence in Ryan Fitzpatrick, who is good at winning meaningless games. Fitzpatrick should be able to put together some scoring drives and put the Bucs in a position to win. I’ll take Tampa here.