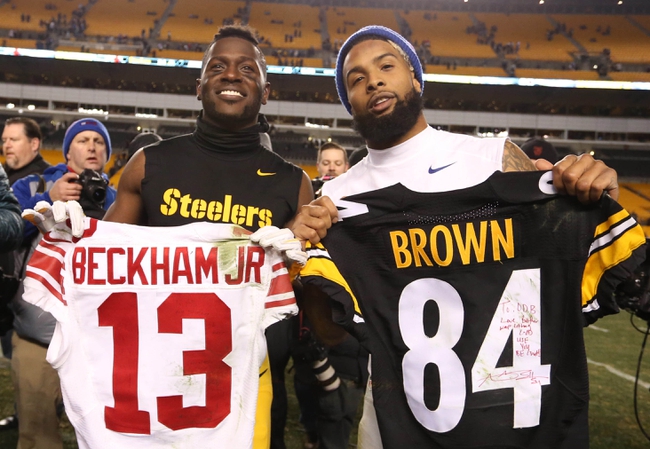 The Pittsburgh Steelers have won double-digit games each of the last three seasons and hope to take that next step while Ben Roethlisberger is still capable of playing at a high level. Speaking of Roethlisberger, he rarely plays in the preseason and Landry Jones is banged up, so we could see a ton of rookie Joshua Dobbs in this contest. Roethlisberger is always kept in bubble wrap and Jones is dealing with an abdomenal issue. The ground game is also going to be limited in this game with Le'Veon Bell and James Conner injured, which opens the door for Fitzgerald Toussaint and Knile Davis. The good news is the Steelers return their offensive line and should be set with so many familiar faces back on the squad. Defensively, the Pittsburgh Steelers return the bulk of their starters, but exhibition games will turn the focus to young players such as T.J. Watt, Keion Adams and Cameron Sutton.

The New York Giants are coming off a solid 11-win season and hope to make the playoffs back-to-back years for the first time since 2007-08. The Giants have loads of talent on offense with Eli Manning, Odell Beckham Jr. and Brandon Marshall leading the way, but don’t expect to see those stars much in this contest, if at all. Instead, it’s going to be a whole lot of Davis Webb and Geno Smith proving they deserve to snag an NFL roster spot while Evan Engram proves he can be the difference maker at the tight end position. Of course, veteran backup quarterback Josh Johnson is sure to see the bulk of the reps in the first half with his job security already locked up. Defensively, the New York Giants didn’t change much, but rookie defensive lineman Dalvin Tomlinson is out to earn a starting job, and Eli Apple can improve his spot on the depth chart with Valentino Blake dealing with a back issue.

The Steelers have too many injuries on the offensive side of the ball and may very well give majority of the reps to Dobbs, which isn't a terrible idea, as experience is the best teacher, but I doubt the kid is ready for this stage even in the preseason. While the Giants aren't going to play their stars in this contest, they do have a backup quarterback battle and some young players on defense eager to prove their worth as well. Depth and competition are key in preseason games, as it brings the best out of that team. I'll side with the Giants and the reasonable chalk here.