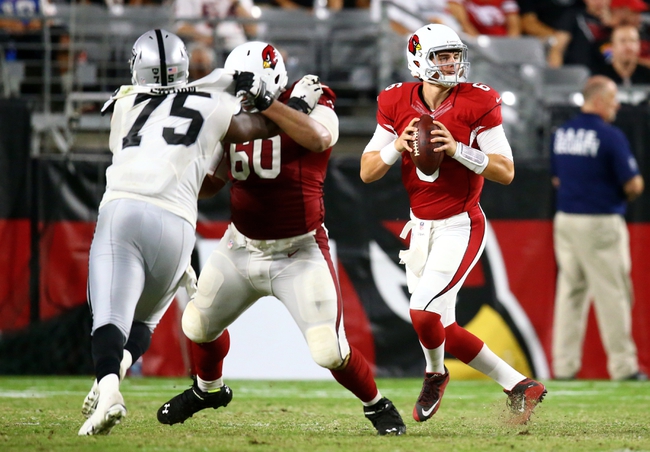 Down in Glendale at University of Phoenix Stadium, the Oakland Raiders and the Arizona Cardinals will be kicking off their NFL preseasons.

The Raiders finished the 2016 season with a winning record for the first time since 2002. Oakland went 12-4 for a second-place finish in the AFC West, but lost the Wild Card game against the Texans.

2017 will be the Raiders’ third season under head coach Jack Del Rio, who will preside over a few new faces. Oakland was fairly active in free agency, signing impact players TE Jared Cook and WR Cordarrelle Patterson, as well as OT Marshall Newhouse. The Raiders suffered a few key losses, however, including RB Latapius Murray, LB Malcolm Smith and WR Andre Holmes. All of that said, the big incoming name here is former Seahawks RB Marshawn Lynch, who will head up the running game.

QB Derek Carr will be at the helm of the offense in 2017. His key targets this year are WRs Michael Crabtree, Amari Cooper and Patterson. Lynch is Oakland’s top back, and behind him are Jalen Richard and DeAndre Washington.

As for the Cardinals, they’re coming off a disappointing 7-8-1 finish in 2016, which somehow was good enough for second place in the NFC West. Arizona was decimated by injuries last year and stumbled to a 1-3 start.

Head coach Bruce Arians returns for a fifth season in 2017, and he’ll be tasked with helping his team return to the playoffs. Key additions in the offseason for the Cardinals include S Antoine Bethea, K Phil Dawson and LB Jarvis Jones. Five defensive starters bolted in free agency, however, so Arizona will be without Calais Campbell, Tony Jefferson, DJ Swearing, Marcus Cooper and Kevin Minter.

Both teams have a few injury situations to deal with heading into preseason Week 1. For the Raiders, Keith McGill, Gareon Conley, Jon Feliciano, Roy Helu, Donald Penn and Jihad Ward will be out, while Amari Cooper and Khalil Mack are questionable. As for Arizona, they’ll be without TJ Logan, Deone Bucannon and Jake Coker, while their lengthy questionable list includes Jarvis Jones, Karlos Dansby, Jaron Brown, John Brown and Mike Jenkins.

Despite suffering some key losses in free agency, the Cardinals still have some pretty stout hopes for this year. Behind Palmer are QBs Drew Stanton and Blaine Gabbert, two QBs who are capable of leading scoring drives. I like the Cardinals’ second- and third-string guys to outperform Oakland here, so I’ll take Arizona for the cover.