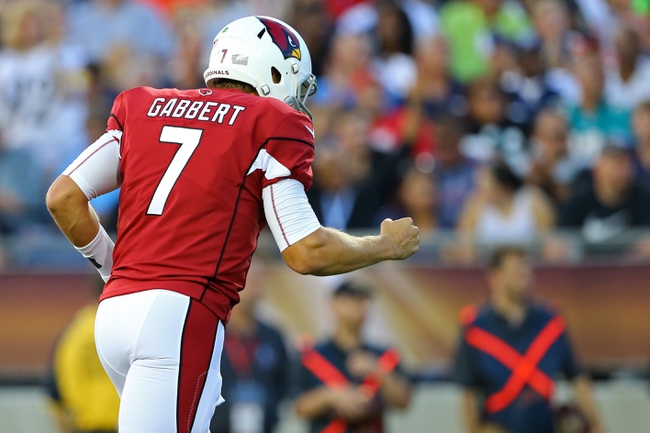 The Oakland Raiders and Arizona Cardinals meet Saturday in NFL preseason action at U of Phoenix Stadium.

The Oakland Raiders enter this season as a popular Super Bowl pick with bettors and hope to make the playoffs back-to-back years for the first time since 2001-02. The Raiders are loaded offensively with Derek Carr, Amari Cooper and the newly added Marshawn Lynch, but the preseason will be all about guys such as Connor Cook, E.J. Manuel and rookie running back Elijah Hood. Oakland doesn’t have a ton of new faces on offense, but offensive lineman David Sharpe has to prove he’s worthy of a roster spot while George Atkinson has to separate himself in a crowded backfield. Defensively, the Oakland Raiders return the same starting unit from a year ago, but exhibition play is a chance for IK Enemkpali, Eddie Vanderdoes, Jelani Jenkins and Breon Borders to earn regular season playing time. If the Raiders are going to make a Super Bowl run, depth is key, especially on defense where there were questions last season.

The Arizona Cardinals play their second preseason game of the year after losing to the Dallas Cowboys, 18-20. The Cards rested majority of their starters at both ends, as Blaine Gabbert and Trevor Knight split the reps at quarterback while T.J. Logan (out 12 weeks with wrist surgery) showed flashes at running back with just four attempts. Gabbert was easily the most impressive player for the Cardinals on offense, completing 11 of 14 passes for 185 yards, actually looking like a backup who can be counted on if something was to happen to starter Carson Palmer. Defensively, Rudy Ford led the Arizona Cardinals with 10 tackles but will miss this game with a hamstring injury, while Ironhead Gallon had nine tackles and Brandon Williams had an interception. With so many injuries to the Cardinals already, it’s going to be interesting to see how much key players play in this contest.

The starters have to play at some point for the Cardinals, but with so many injuries already, I have to wonder just how much Arizona is going to risk things here. Either way, I like the fact the Cards have a preseason game under their belt, as the removed rust and getting back in the swing of things gives Arizona a nice edge here. I also don't like the Raiders backup QB situation, as Cook and Manuel aren't NFL quarterbacks and are questionable backups. Gabbert played very well last week, has some pep in his step and should get a lot of reps here as well.