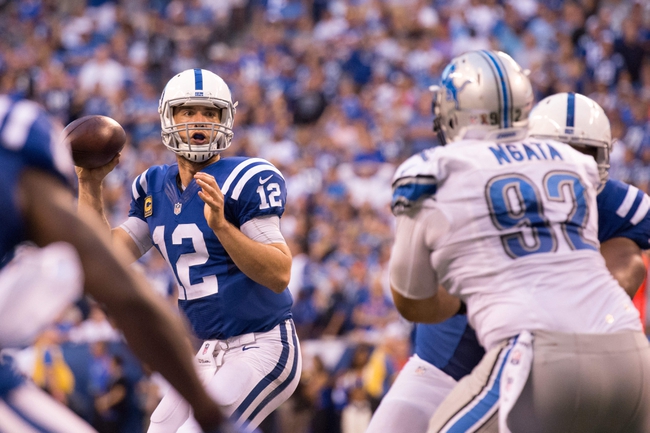 Out at Lucas Oil Stadium on Sunday, August 13, the Detroit Lions and the Indianapolis Colts will be kicking off their NFL preseasons.

The Lions are coming off an improved 2016, finishing 9-7 and second in the NFC North, good enough for a Wild Card playoff berth. Detroit lost that Wild Card game to the Seahawks 26-6, but it was their first playoff appearance since 2014.

Head coach Jim Caldwell returns to the Lions for his fourth year, and he’ll be presiding over a bit of a new-look team. Detroit lost a few familiar faces this offseason, including DT Stefan Charles, WR Andre Roberts, LB Jon Bostic and TE Clay Harbor. Joining the ranks of the Lions in 2017 will be notable names such as RB Matt Asiata, LB Jarrad Davis, DT Akeem Spence and OT Rick Wagner.

Helming the offense yet again this year is QB Matthew Stafford, who is surrounded by talent including RB Ameer Abdullah, WR Golden Tate and TE Eric Ebron.

Over on the Colts’ side, they’re fresh off a disappointing 8-8 season that saw the team finish third in the AFC South and missed the playoffs. That marked the first time Indianapolis would miss the postseason in consecutive years since 1997-98.

Coming into 2017, head coach Chuck Pagano will be back for his sixth year at the helm. He’ll preside over some re-signed players, including CB Darius Butler and RB Robert Turbin. Indianapolis endured a few departures of notable names as well, losing RB Jordan Todman, S Mike Adams and OLB Chris Carter.

QB Andrew Luck will be taking the snaps again this year for the Colts. Luck will be throwing to WRs TY Hilton and Donte Moncrief while handing off to RB Frank Gore. TE Jack Doyle will also look to make an impression in 2017.

Injury-wise, both squads look pretty good but have a couple of things to keep their eyes on. The Lions’ Ziggy Ansah (ankle) is on the PUP list, as is LT Taylor Decker. As for the Colts, QB Andrew Luck is on the PUP but is expected to be healthy for Week 1. Christine Michael is in IR, while Clayton Geathers will miss at least a half-dozen games.

After the first-string guys on both sides, there’s not a lot of name recognition going on here. Scott Tolzien and Jake Rudock will be duking it out as QBs here, and it gets less remarkable from there. All things considered, though, I think the Lions have enough depth to bag a victory here in something of a coin-flip game. It’s probably one to stay away from but I’ll take Detroit.