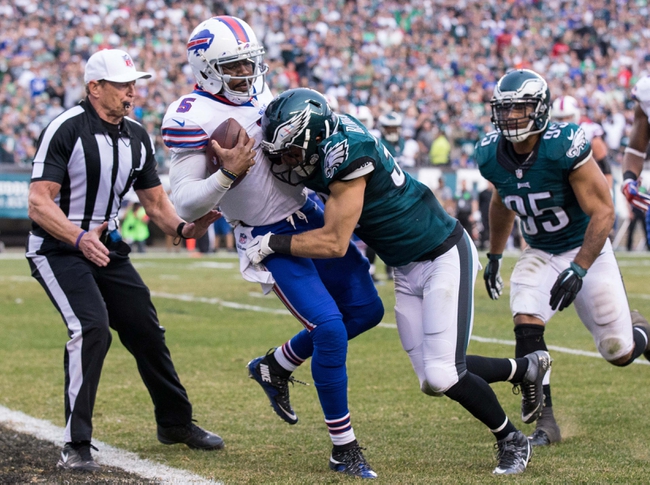 Over at Lincoln Financial Field on Thursday, the Buffalo Bills and the Philadelphia Eagles will be meeting up in NFL preseason Week 2 action.

The Bills are coming off a disappointing 2016, during which they finished 7-9 and in third place in the AFC East. Buffalo missed the playoffs once again, marking the 17th straight season they haven’t played in the postseason. That’s the longest current drought in all four major professional sports leagues in North America.

The 2017 campaign will be the first for head coach Sean McDermott, who will preside over a retooled roster. Buffalo lost a few notable names in free agency including CB Stephon Gilmore, WR Robert Woods and WR Marquise Goodwin. The Bills also picked up a few new faces in DB Micah Hyde, WR Andre Holmes and S Jordan Poyer.

The Bills’ Week 1 preseason game ended in a 17-10 loss to the Vikings. Nathan Peterman did most of the throwing, with a 13-for-25 line, 112 yards and the Bills’ only touchdown. Sammy Watkins was the lead receiver with four catches for 39 yards.

Over on the Eagles’ side, they finished 7-9 and in last place in a talented NFC East. Though Philadelphia started 3-0, they lost nine of their final 13 games and missed the playoffs for the fourth time in the last five seasons.

Philadelphia’s Week 1 preseason game ended as a 24-9 loss to the Packers. The good news for Philly in that one is that QB Carson Wentz went 4-for-4 with 56 yards and the Eagles’ only TD during his time in the first quarter. Bryce Triggs was another bright spot with seven catches for 91 yards.

Both of these teams will have their hands full in their respective divisions, as there are some great squads mixed in there. Depth-wise, Philadelphia probably has an advantage here, and if Wentz can come out firing like he did in Week 1 he’ll put the backups in a good position against a banged-up Bills defense. I’m going with the Eagles to cover here.